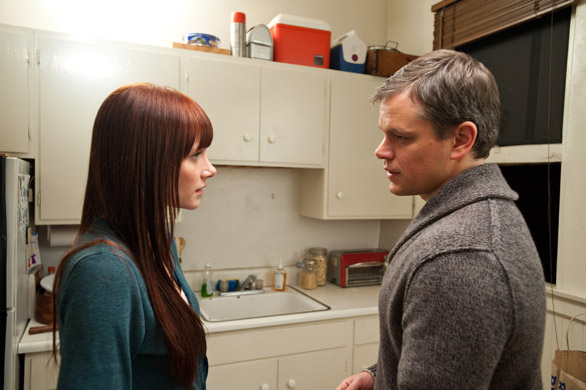 With his last feature, Invictus (2009), director Clint Eastwood moved away from his more interesting efforts by crafting a film that was extremely formulaic and mediocre, despite an engaging premise and talented lead actor. He has definitely drifted away from making a “safe” film with Hereafter, though, which stars Matt Damon.

The film, which touches on the ideas of psychics, spirituality and the afterlife, goes back and forth between three characters in three different countries, all of whom are dealing with one of the aforementioned ideas in his or her own way. First, there is Damon’s George, a man with psychic abilities living in San Francisco who has trouble forming relationships because of his unique gift (which he refers to as a curse). Next, there is the beautiful Marie (Belgian-born actress Cécile De France), a Parisian author and newscaster who believes she briefly encounters death after being swept up in a tsunami wave while on vacation. And last, there is a little boy named Marcus who loses his twin brother in a car accident in London and who, as a result, wants to know exactly what happens to someone when they die.

The film jumps back and forth between these three stories, each interesting and engrossing in its own right. While George juggles building a relationship (with Bryce Dallas Howard) and his business-minded brother (Jay Mohr, who wants George to make some money by doing readings for people), Marie struggles with getting back to work after her accident and Marcus is forced to deal with being taken in by a foster family after his distressed mother is taken into rehab.

The fact that Eastwood drifts between three stories, which do not become intertwined until the last third of the film, is an interesting – and effective – choice, as we, the audience, are able to get truly wrapped up in each person’s unique situation. The film does drag on a bit, which does get a bit annoying at times; however, this is not nearly as disappointing as the film’s ending, which is so abrupt that it left this reviewer wondering why, with so much time devoted to each of these stories, the ending leaves one feeling as though the film could have successfully pushed on for another hour or two.

All things taken into consideration, however, Hereafter is a genuine, heartfelt, perplexing film that, if anything, has succeeded in taking Eastwood out of “safe” territory and back into something much more interesting.


Hereafter is currently in select theaters.
Article posted on 10/19/2010
This article has been viewed 1655 times.