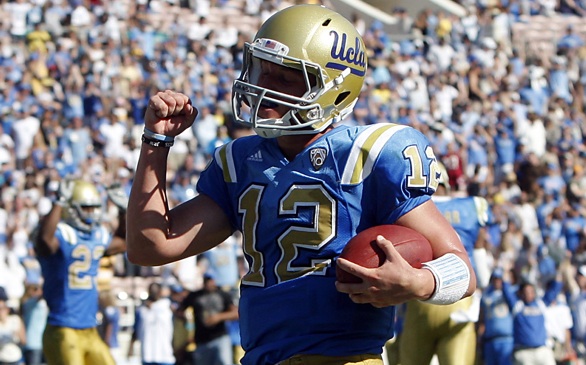 The Oregon Ducks showed why they are ranked as the top NCAAF program in the nation via the human polls, defeating the visiting UCLA Bruins in solid fashion, 60-13, in Eugene, Ore., on Oct. 21.

“Well, they were terrific tonight on all cylinders, the pace of play, the quarterback hitting almost everything,” UCLA head coach Rick Neuheisel states. “We were having a hard time keeping up.”

Starting quarterback Kevin Prince did not dress up because of a knee injury, and sophomore Richard Brehaut played instead. Brehaut completed 16-of-23 passes for 159 yards.

With the loss, the Bruins are now 3-4 overall and 1-2 in the Pac-10. Meanwhile, the Ducks keep rolling days after being ranked No. 1 for the first time in school history; they are 7-0 overall and 4-0 in conference play.

UCLA managed to score one touchdown and net two field goals, as Oregon’s stingy defense made stop after stop against the Westwood squad. In fact, Oregon allowed UCLA’s lone touchdown with under two minutes remaining in the fourth quarter as Brehaut rushed for a six-yard gain and score through the left side.

For the game, the nation’s No. 2 rusher in LaMichael James had 20 carries for 123 yards with two touchdowns, including the opening TD with 9:15 left in the first quarter. He later added another score near the end of the third quarter.

The running game became a factor for the Ducks, but their passing aspect was a success as well. Quarterback Darron Thomas passed for 308 yards in 22-of-31 attempts. Thomas, who found a total of seven receivers, connected with Jeff Maehl eight times for 107 yards and one touchdown.

“They gave us some looks we could throw in,” Thomas says. “Our receivers made good plays on the ball. A lot of wide-open guys.”

UCLA next plays Arizona on Oct. 30 at 12:30 p.m., entertaining the Wildcats at the Rose Bowl in Pasadena.