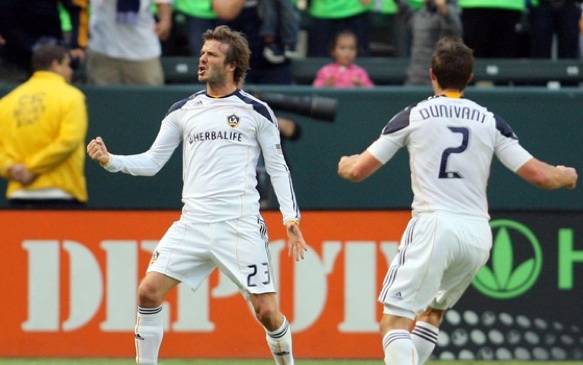 After a 2-1 victory over the visiting FC Dallas at the Home Depot Center Oct. 24, the Galaxy celebrated collecting the best record in the MLS.

“It was a great win. We had to show up tonight. We played as good a team as there is in the league, and to my surprise, they came out with all of their guns. We had to earn it tonight,” Galaxy head coach Bruce Arena says. “We had to come from behind; we had to play against an excellent team and a tough, demanding game. I think we needed this game.”

The Galaxy finish the 2010 campaign first in the Western Conference with a record of 18-7-5 and 59 points, three ahead of second-place Real Salt Lake. FC Dallas ends the year with a third place spot in the standings.

Soon after a great hustle effort from midfielder Landon Donovan against a defender, midfielder David Beckham fired a potent shot from the 18-yard line past the FC Dallas goalkeeper. Donovan registered his MLS best 16th assist of the season, while Beckham recorded his second goal in the 33rd minute of play during the first half.

“When I won the ball, my first thought was to play it across the goal, but there was nothing there. David was calling for it, and it was a fantastic finish by him,” Donovan says.

“Landon won the ball back, and he is a player that knows how to set other players up. His ball to me was perfect, and I knew if I hit the target, there was a chance it would go in, obviously,” Beckham adds.

Brazilian Juninho’s score a minute into the second half was the difference for Los Angeles for the night, which turned out to be physical and energetic from beginning to end. Juninho netted his second score of the season off a loose ball in the box.

The Galaxy came from behind to win this game after Atiba Harris scored for FC Dallas in the 24th minute.

Los Angeles now face Seattle Oct. 31 during the first round of the playoffs, while FC Dallas squares off against Real Salt Lake. The New York Red Bulls, Columbus Crew, Colorado Rapids and San Jose Earthquakes are the remaining teams to make a playoff appearance. This year’s MLS Cup will be held in Toronto, Canada, in November.