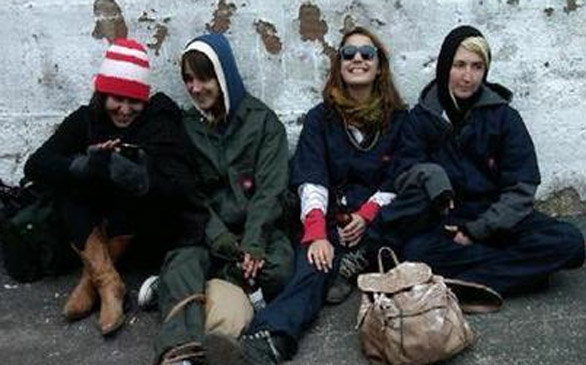 Silver Lake darlings Warpaint consummate the hype that’s followed them since their 2008 EP, Exquisite Corpse, with their cathartic debut, The Fool.

Part of what makes this all-girl band so extraordinary to listen to is the gentle blend of guitars with drummer Stella Mozgawa’s hypnotic percussion. The Fool requires patience and a lot of attention to understand and enjoy every little sound.

Cascades of harmonizing vocals sound glazed against the dreamlike landscape created by the slow, thumping bass lines and scattered guitars. These aren’t songs; they sometimes feel like auditory paintings.

The Fool would fool you into thinking this band’s chemistry is years old, but in an amazing display of congruence, Mozgawa’s addition to the band came only a month before initial recording began. The gel of “Undertow” and “Warpaint” in all its jazzy wonder shouldn’t sound this good for a band barely getting to know each other, but part of magic relies on not understanding the illusion and just being mesmerized by it.

As calming and rich as the material sounds, its only downfall is that it’s too mellow toward the end of the record. It’s easy to drift off, so a little variation on the sequencing couldn’t have hurt, but if you’re committed to the whole ride, this won’t be an issue.

The Fool is currently available.