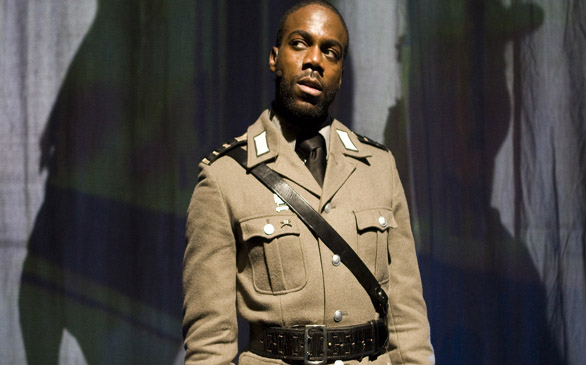 I saw “Clay,” Matt Sax’s one-man show, in 2007 and was blown away by his energetic, magnetic talent. The way he delivered his raps was exciting, not only because they were smart, but because Sax combined hip-hop and theater to great success. “Venice” is his latest project, on which he again collaborates with Eric Rosen (Last time Rosen directed. This time he wrote the book and co-wrote the lyrics.). It is a post-apocalyptic hip-hop musical based on Othello.

Sax narrates, and again is vivaciously dope. But the show’s greatest moments come in the physical and aural form of Rodrick Covington, Venice’s brother Markos Monroe. Part R&B crooner, part emcee and part sinister thespian, it’s hard not to hope that Covington takes the stage – and remains. He’s fly and emotive, and he sets the bar high for the other actors to follow. The good news is that most do, resulting in theater that is non-conventional, original and pushes the boundaries of what’s been done before. And that’s probably the best news of all: “Venice” heads down an innovative path that more theater should be brave enough to go.

Adding to the pleasure of a night out in Culver City is the plethora of restaurants that now seem to be everywhere. Two toothsome bets are Rush Street (9546 Washington Blvd.; rushstreetculvercity.com) and Le Saint Amour (9725 Culver Blvd.; lesaintamour.com). If you’re in the mood for a sports bar with a tasty burger (with sweet potato fries, of course), go for Rush. If a romantic evening is on the menu with a French-style atmosphere and richly delicious fare, wine and dine at Le Saint Amour. If you haven’t been to Culver City in a minute, it’s poppin’.