Back to the Future: 25th Anniversary Trilogy and More 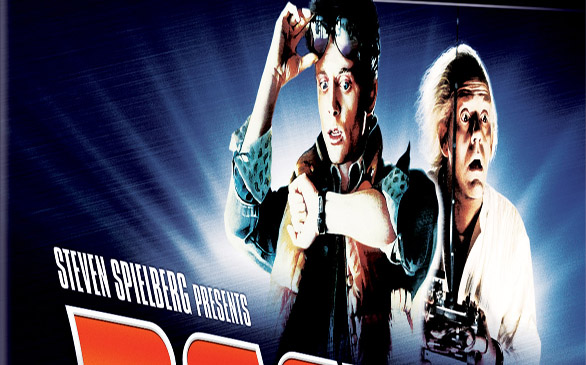 Blu Notes: Back to the Future: 25th Anniversary Trilogy – Marty McFly turns 25! One of the most purely enjoyable films ever made, Back to the Future, along with its two sequels, is now available in a new digital restoration, loaded with all new bonus features.

Sure, he may have gone a little overboard with the squibs, but Paul Verhoeven really crafted a sly satire in his futuristic action flick RoboCop, now available as part of the RoboCop Trilogy on Blu-ray.

From Criterion With Love: One of the greatest antiwar films ever made, Stanley Kubrick’s Paths of Glory gets the Criterion treatment. Kubrick is equally adept in bringing the grime, chaos and futility of the trenches to life as well as the infuriating politicking of the Masters of War.

The Vault: Bob Hope is a conman in trouble with the mob in The Lemon Drop Kid. To pay back a gangster, Hope concocts a bogus charity and hits the street as Santa Claus.

Three great B films finally see the light of day, available for order online at the Warner Archives. Jimmy the Gent, directed by Michael Curtiz, stars a young James Cagney as an unscrupulous genealogist who finds (or manufactures) heirs to fortunes. But he’s set on winning the heart of the earnest Bette Davis.

In High Wall, Robert Taylor is a brain-damaged man who confesses to a murder he may not have committed. Betrayed stars an up-and-coming Robert Mitchum in a story about a naïve girl whose fiancé may be a murderer.

Teknolust is a totally original sci-fi film starring Tilda Swinton as four cyborg clones who subsist on Y chromosomes found in sperm and their quest for love.

Kisses follows two kids who run away from home and are all on their own in the big city of Dublin.

The Horror! The Horror! Killer crocs are back for more campy gory fun in Lake Placid 3, starring “Eureka”’s Colin Ferguson.

In the vein of Shaun of the Dead, Doghouse is a British horror comedy about a group of guys stranded in a town populated by cannibalistic women who feed on men.

Stranger Than Fiction: Catch Charles Bukowski’s final public readings in Charles Bukowski: One Tough Mother. The two-disc set also includes featurettes exploring the Bukowski archive in San Marino and an interview with the directory of Bukowski: Born Into This.

In South of the Border Oliver Stone goes on a road trip across South America to show the truth behind the mainstream media’s misrepresentations of seven of the region’s leaders, including Hugo Chávez and Raúl Castro.

The Idiotbox: Now all three seasons of the great Canadian series “Slings & Arrows” are available on Blu-ray in the Complete Collection. The blackly comic series follows the travails of a dysfunctional Shakespearean theater company.

A werewolf, a ghost and a vampire make for dysfunctional roommates in Being Human: Season Two.

The Final Season of the horror anthology “Tales From the Darkside” features episodes written by Stephen King and Clive Barker.

The Real L Word: Season One shows the real world of hot, high-profile lesbians living it up in Los Angeles.