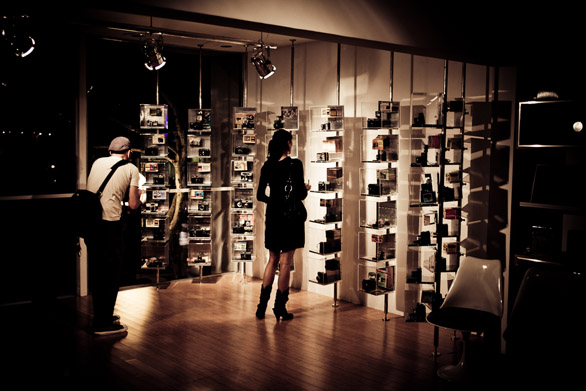 While the vast majority of the world is already resting comfortably in the digital age, the Diana is holding strong to its archaic roots in the film world. On Oct. 14, Diana World Tour kicked off at Lomography Gallery Store Los Angeles to showcase the world-famous Detrich Collection of vintage Diana F+ cameras. The gallery is also hosting the Vignettes from the City of Angels photo exhibition featuring L.A.-inspired Lomographs captured with the plastic lens of the Diana F+. There are also Custom Clones and Vignettes being auctioned off for charity.

At the opening night party, the customized cameras were dolled up in disguise as any and everything from robots to standing microphones to Star Wars characters. Participants, including Seth Rogen, contributed their dreamy-toned photographic works to support charity. After only two weeks with the Diana camera, Rogen created an image (with a $50 starting bid) in order to raise money for the National Alzheimer’s Association. Other contributors will donate money to their charity of choice. Bidding will continue until the tour’s closing ceremony on Nov. 14.

The Diana camera began as a $1 plastic camera originally distributed in Hong Kong in the late 1960s. After a bumpy start, the camera gained notoriety in the ’70s after the manufacturers stopped making them. The classic came back into creation with a new design in 2007. Even the newer models still use film.

The Diana World Tour has several upcoming events planned: DIAna de los Muertos! parties (Oct. 30-31), a Diana F+ Starter workshop (Nov. 3) and a Diana Happy Hour (Nov. 13) are just some of the happenings scheduled for the remainder of the tour.