Monsters: If Whitney Able and Scoot McNairy can make it here… 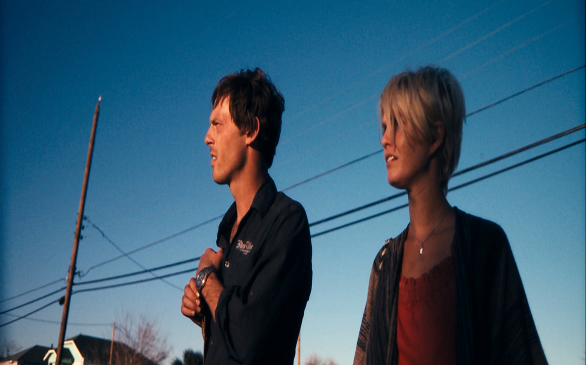 According to current cinema, the apocalypse is now. If there isn’t a superhero to save the world, then aliens or zombies set up camp and make a realistic case for the possibility of monsters. In the vein of recent films like District 9 and 28 Days Later, a new flick about to hit theaters is playing with our innate attraction to the unfamiliar.

“People always enjoy films about things they imagine,” explains Whitney Able, star of Monsters. “Monsters are a fear. It can be a metaphor for lots of things in your life, and people can relate to that on a metaphorical level. We didn’t include the monsters so much that it’s a movie about monsters. It sits in the backdrop. Our logline of the film is, ‘road movie, sci-fi, love story … with monsters in the background.’”

Able stars as Samantha Wynden who is the daughter of a wealthy newspaper tycoon and who is injured in Mexico after a flare-up of the “creatures.” Oh yes, Mexico is not only plagued by cocaine and ruthless drug lords, but also by rocket-sized, octopus-like monsters that hover over the country.

“We were acting to nothing,” says Able about her computer-generated co-stars. “We saw a couple vague drawings, but it took away this idea of having to react to something that isn’t real and that is this fake thing standing in front of you. Because it’s CGI and we weren’t shooting on a green screen, we were in the real world, and it took the pressure off.”

Andrew Kaulder (Scoot McNairy) who works for Sam’s father is also in Mexico and is assigned to escort Sam to the coast where she can safely sail home. Naturally, their plans are thwarted by a hotel thief who steals Kaulder’s money and the lack of viable transportation. They must resort to taking a bus through alien-infested forests, a terrifying riverboat ride through the infected area and a long walk to make it home.

To film Monsters, the cast and crew shot in Mexico, Belize and Guatemala to name a few countries. But Able admits it wasn’t as glamorous as a Hollywood set because they weren’t in “the touristy places that people think of when they think of Mexico. We stayed in small hotels because we were in these small towns that no one really goes to. We weren’t spoiled by any means, but we didn’t have to camp in a tent in the jungle. Although that would have been awesome!”

McNairy and Able, who are now husband and wife, were brought into the project as a pair because the filmmakers wanted a real-life couple to play Sam and Kaulder.

“It was definitely nerve-wracking,” says Able about working with her then-boyfriend. “It’s the kiss of death for some acting couples. Many don’t survive it, but we said that if we could get through this, and work together on this level, then we could probably get married. And we did.”

“I’d been to some pretty backward areas, spending weeks at a time on top of a mountain, camping and stuff,” explains McNairy. “I warned her that it was going to be really rough. But when we got out there none of it bothered her. She really just didn’t care.”

Director Gareth Edwards has said that he was inspired to write and direct what would become Monsters after watching Mexican fisherman at work. He developed not a full-fledged script, but something like 12 pages of notes outlining basic plot details, emotions and actions. The dialogue and other minor characters were left to the two main actors and their improvisation skills.

“Right off the bat I noticed how calm he was, and how patient he was,” gushes McNairy about Edwards. “This was one of the first directors I’ve worked with when I knew that he is going to do really well, like Peter Jackson or George Lucas. He’s really smart and really creative.”

The film is a surprisingly funny and often profound take on the typical monster genre piece.

McNairy’s best advice is to, “Go into this film with an open mind. It’s got monsters in it, but don’t let the title deceive you even though it will deceive you. Don’t expect anything, and you will enjoy this film.”