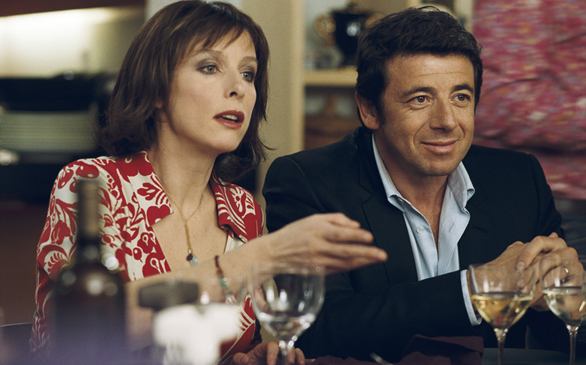 Change of Plans is billed as a “comedy of manners,” meaning the story involves several secret romantic affairs and tangled lives, with a drizzle of funny and vulgar dialogue. But the film is only really this way for the first act of the film.

The story follows a group of acquaintances as they have a momentous beginning-of-summer dinner party and then catches up with them a year later to see how that night has affected their lives. ML (Karin Viard) and her husband Piotr (Dany Boon) host the party, not planning to force anything to come to the fore except to set up ML’s sister Juliette (Marina Hands) with their kitchen designer, Jean-Louis (Laurent Stocker). As the night goes on, however, old friends unexpectedly reunite, couples fight and two old-timers connect. Flash forward a year and there are injuries, divorces and pregnancies, all stemming from that night.

The film starts out fast and furious, the characters throwing out quick and witty dialogue. There’s even a talking-about-sex-with-your-mother joke for good measure. Another humorous sequence involves two old-timer Parisians who grumble about the younger set and their uptight ecological ways.

But as the film goes on, the drama of the unfolding events takes over any cheekiness the film tried to have in the beginning. I don’t think the film suffers from it, though. The viewer becomes engrossed in these people’s lives, and it’s interesting just to see how the different situations will get resolved. These characters’ lives were so tangled it was reminiscent of “Grey’s Anatomy.” But you know, without all the gory surgery shots.

Every entanglement boiled down to the fact that the characters were unhappy with themselves. By finding that thing that made them happy, they were able to resolve their differences. It was very interesting to me because it seems like sometimes we make up with those close to us out of necessity. But these characters did so out of true connection and greater understanding. As one character, a flamenco dancer says after she gains a freedom, they “can just live.”