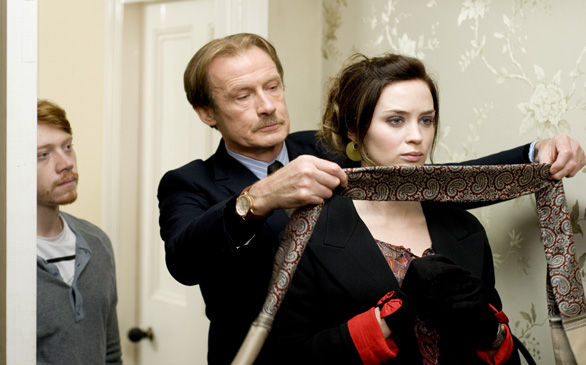 Jonathan Lynn is no ordinary writer-director in my eyes; he’s the man responsible for two of my all-time favorite comedies, the eminently quotable Clue (“Flames – on the side of my face. Breathing – breathless – heaving breaths.”) and My Cousin Vinny (“What is a ‘yout’?”).

Having spent hours watching and re-watching the hyphenate’s work, I walked into his latest film, Wild Target, expecting only the best. Unfortunately, it’s a movie that lacks some of the brilliance of his earlier work, but the man hasn’t directed anything in seven years. Perhaps he’s just gotten a little rusty.

A remake of the 1993 Pierre Salvadori French hit, Cible émouvante, Wild Target stars Bill Nighy as Victor Maynard, a hermetic, regimented, lonely second-generation assassin on the verge of retirement. But there’s always that one last hit. Assigned to clip a ballsy and beautiful kleptomaniac, Rose (Emily Blunt sporting an outrageously fabulous wardrobe), after she pulls a fast one on hotelier/gangster Ferguson (Rupert Everett), Victor finds himself unable to carry out the hit and instead uses his lethal force to protect Rose and the pair’s unwitting tag-along sidekick, Tony (Harry Potter’s sidekick Rupert Grint).

While the film’s plot can move from implausible to downright campy, thanks to Lynn, it’s able to walk an enjoyably fine line between thriller and quirky comedy, though it should be noted the humor is decidedly British, filled with restraint and irony laced with a splash of raunchiness. But that same gentility is a great part of the film’s charm, especially as Nighy imparts the rigidity of a cold-blooded killer with a dutiful schoolboy’s assiduousness.

Although there are certain romantic moments between Rose and Victor that inspire shudders of dread, Blunt plays the part of the manipulative and loopy femme fatale with relish and zeal, as Nighy holds the film’s emotional center as a quiet, stoic, lovable murderer. The two Ruperts fill their roles aptly, though they’re little more than window dressing. Interestingly, as Everett breezes through his turn as the resident baddie, Grint’s effort to prove his mettle is flagrant. With just two more Potter films to go, the young actor seems to be trying everything he can think of to demonstrate there’s more to him than being Ron Weasley.

While Wild Target isn’t the jewel one might expect from Lynn, it’s a fine cubic zirconium thanks to a great cast, most notably, the unlikely charm of the film’s leading man.