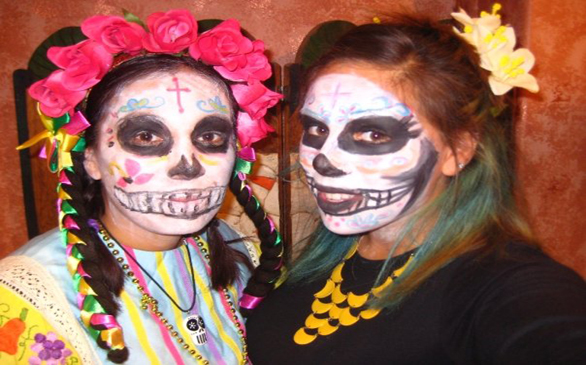 If you’ve ever seen people dancing, eating and celebrating in costumes in a cemetery, did you think it was another Halloween festival? Or that these people were being rude and not letting the dead rest in peace?

Unless you knew what was going on, you probably would not have known that these people were actually celebrating and honoring the deceased in traditional Mexican culture. El Dia de los Muertos, or Day of the Dead, is a traditionally Mexican holiday celebrated mainly in Mexico but also in parts of the United States. The indigenous people of Mexico have been practicing the rituals of the Day of the Dead for at least 3,000 years. When the Spanish conquistadores landed in Mexico, they tried to merge this ritual with the Catholic holidays of All Saints Day and All Souls’ Day (Nov. 1 and 2). It is now celebrated on both of these days.

Previously it was celebrated for the entire month of August and was dedicated to the “lady of the dead.” It is said that during these days it is easier for the souls of the departed to visit the living. This is why people try to coax their loved ones to come back to visit them at this time with goodies, dances, music and celebration. In rural Mexico, people visit the cemetery where their loved ones are buried. They decorate gravesites with marigold flowers and candles, bring toys for children and bottles of tequila for adults. They sit on picnic blankets and eat the favorite food of their loved ones. People don wooden skull masks called calacas and dance in honor of their deceased relatives. In the United States and in Mexico’s larger cities, families build altars in their homes, dedicating them to the dead. These private altars contain the favorite foods and beverages and photos and memorabilia of the departed. The intent is to encourage visits by the souls, so that the souls hear the prayers and the comments of the living directed to them.

This is not a sacrilegious act. It is not meant to be taken as raising people from the dead, but mainly to welcome their spirits back to celebrate them. Almost like a birthday party … except, well … yeah. If you’re interested in experiencing El Dia de los Muertos in person, check out these events:

The Latino Museum of History, Art and Culture

As of print date, there isn’t a special Dia de los Muertos event, however, this is a good place to visit to learn more about the Latino culture that relates to this holiday. Closed Mondays. 10 a.m.-4 p.m

This is the nation’s largest and most authentic celebration of Day of the Dead. It is the only cemetery in the country that commemorates this tradition. Dress up as your favorite icon from the Independence or Revolution era. Ruben Albarran, the lead singer of Cafe Tacuba, performs at 9 p.m. 2 p.m.-midnight. $10.