Aaron Eckhart: Explores the Darker Side of Acting in Suspect Zero 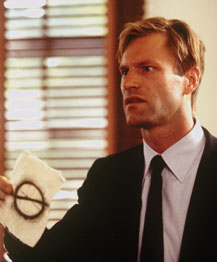 Aaron Eckhart’s has always blazed his own path. Throughout the course of his career, the California native has proven himself to be a versatile actor with the ability to easily transform into an affable romantic lead (Erin Brockovich) or a slime-ball executive (In the Company of Men). This summer he returns to theaters as FBI Agent Thomas Mackelway in the psychological thriller Suspect Zero.

Eckhart’s film career began when he entered Brigham Young University, where he met future filmmaker Neil LaBute. This friendship would prove to be fruitful, with LaBute being credited for later creating some of Eckhart’s most memorable roles.

As years passed and the wheels began to turn career-wise, Eckhart teamed up with his college chum LaBute who was filming his directorial debut and cast the aspiring actor as the misogynistic creep Chad for In the Company of Men, which proved to be a breakthrough performance. The phones have been ringing ever since.

"Neil really created the role – I blame him," Eckhart says jokingly. "I just gave it a little emotion. It’s all really Neil and what he wrote for the role, and I just did him to the best of my ability."

The following years brought progressively bigger roles for Eckhart and work on big budget projects with directors like Oliver Stone, Steven Soderbergh, John Woo and Ron Howard. In his latest film, Suspect Zero, Eckhart’s role is smaller in scale but an edgier feel than the blockbuster movies the actor has appeared in over the past few years. It leads one to wonder, was the switch intentional?

"It was definitely intentional to do a grittier, darker movie. One that took me on a more desperate journey," Eckhart reveals. "The other films were glossier. With Suspect Zero, I read the script and just loved the character."

At the start of Suspect Zero, Agent Mackelway inadvertently violates the civil rights of a serial killer he’s been obsessively chasing and as a result the offender is allowed to go free. Typically a by-the-numbers straight arrow, the agent is demoted and forced to relocate to a remote field office in New Mexico where he’s quickly given an assignment to investigate a seemingly random murder – or is it?

Mackelway’s new case consumes him, and soon his former partner is called in to help the troubled agent connect the dots. After the murderer who got away earlier is killed, all hell breaks loose. Now Mackelway can’t shake the feeling that, in some way, he’s connected to all of the gruesome slayings.

Eckhart explains what drew him to the role and how he prepared for it. "First of all, it’s just an entertaining movie," says Eckhard about why he was drawn to the role of Agent Mackelway. "But as an actor, you look into the genre to find what you need."

Suspect Zero’s source material was based on remote viewing, a process which essentially involves honing the abilities of psychic individuals to locate people and objects wherever they might be hidden. "The director [E. Elias Merhige] set me up with an actual, real-life remote viewer-ex-army intelligence. He, in turn, showed me previous cases he’d solved, how it was done and where its place was within the field of investigation."

Today, Eckhart is thankful for the smaller roles that led up to his bigger breaks in the industry. Eckhart recalls his first role in a small film called Slaughter of the Innocents. "Yeah, that was like a tiny [uncredited] project I did with Scott Glenn. It was a crappy," says Eckhart with a laugh. "Well, not crappy, it was a B movie. But I got my SAG card from doing it."