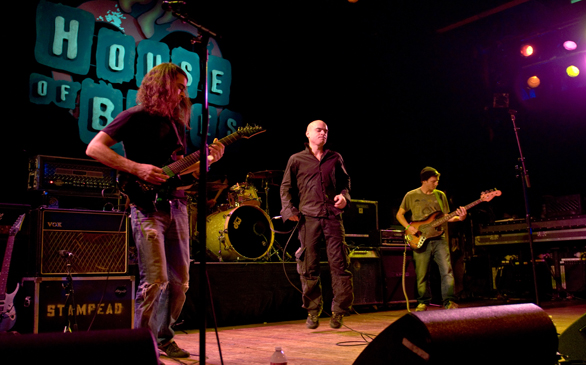 The House of Blues has long been known as a stop on the road to fame for up-and-coming bands as well as home to larger acts. For the members of Lotan Baba, I hope the same will be the case. While the crowd was not large, by the end of the set I think it is safe to say that the band had made more than a few new fans.

After working for years in France, two brothers – Steven (vocals) and Gurvan (guitar) – decided to make their way to Los Angeles. Once here, the brothers added their newest member, bass player Joel O’Neill. The trio is currently playing with a selection of drummers, including Brant Cole and Michael Jerome Moore at venues in and around Los Angeles.

When Lotan Baba began, the atmosphere was instantly transformed by the stage presence and energy of the band. As they moved on, the people in the HOB quickly began to come onto the floor, and before long the band had the complete attention of the crowd.