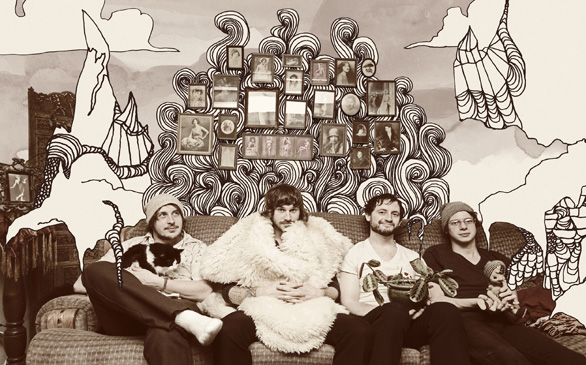 Before forming Portugal. The Man, before being named “Best Vocalist” in 2008 by Alternative Press, before skyrocketing to recognition and a major label on the success of 2009’s The Satanic Satanist, John Baldwin Gourley lived in a small Alaskan town filled with “shitty” metal bands, in a home that ran on a generator and had no phone. Ask him if this sort of upbringing – isolated, physical and rustic – is reflected in the rhythms and lyrics of the band and he’ll say yes, in the sense that anyone’s music is a reflection of their home.

“It’s all relative. Of course we make the music we make because of where we grew up, but there are also really shitty metal bands from up there. I mean shitty metal bands. We could have been a completely different band had we grown up somewhere else, we’ll never know,” says Gourley, the band’s lead singer.

The band they ended up being, Portugal. The Man, has been welcomed into the fold of indie rock and branded with overly used labels like “psychedelic” and “experimental.”

“I feel that we’ve transitioned very well into whatever the next thing is and the next movement,” Gourley says. “We’re just not a part of that movement; we’re just sort of there. We’ve been steadily doing our own thing.”

Portugal. The Man is in the midst of a transition. They – Gourley on vocals and guitar, Jason Sechrist on drums, Ryan Neighbors on piano and Zachary Carothers on bass – recently left their label to join Atlantic Records, the same label Led Zeppelin once belonged to. Since then, they released a video for a single off The Satanic Satanist, the anti-war “People Say,” and are set to release their next album (their debut with Atlantic) sometime early next year.

The band is currently touring through the United States, culminating in a Los Angeles gig at the El Rey Theatre. The band has done nearly 800 shows together. They drive themselves to their shows and spend their free time hanging out and watching movies.

“I watch a bunch of nerdy movies, like Invasion of the Body Snatchers, 2001: A Space Odyssey, Logan’s Run, Blade Runner,” Gourley says. “And then, of course, we like to stay up on American culture and watch ‘Jersey Shore’ and ‘The Soup’ every week.”

Since forming in 2005, the band has put out six albums, including an acoustic version of The Satanic Satanist titled The Majestic Majesty. The band has been a under the radar for most of its existence, but The Satanic Satanist and the slew of positive reviews it received from publications and Web sites intended for non-indie-hipster readers has upped their game.

“I think pretty obviously by far The Satanic Satanist has been our biggest album, and it wasn’t really necessarily written to be that. I just really wanted to write some songs,” Gourley says.

The album peaked at No. 81 on the Billboard 200 list. With the album the band took one step closer to general exposure, complete with extensive play on MTVU of their quasi-spiritual, slightly melancholy track “Do You.”

The band’s next album, American Ghetto, picked up where their previous left off in terms of producing a sound that is never completely any one thing (electronica, folk, post-rock, psychedelic), but the sum of all of its parts.

This time around, on their 2011 untitled album, people will – maybe wrongly – expect something close to what they’ve been getting: a sound rooted in the relative peace of the north, in the Motown and Beatles’ songs Gourley listened to on the oldies station growing up, in their eclectic personal tastes ranging from Nirvana to Wu-Tang Clan to Nigerian popular music. Time will tell.

“I know now, as I get further into the career, that I have to understand the tone now,” Gourley says. “It’s just a lot of those frequencies, the tones that really suck you in ... you really hear it, you really feel it, you really do connect memories because of it.”

Interviews
Searching for hope? Kacey Musgraves’ ‘Rainbow’ is a psalm, and balm, for the pandemic era
618 views

Interviews
You might think, ‘Who asked Dashboard Confessional to come back?’ Chris Carrabba has some answers
640 views

Interviews
Billie Eilish isn’t stressing over the Grammys. She’s busy worrying about the end of the world
1,143 views

Interviews
With new fans aboard, Korn shows how to metal in middle age
1,052 views