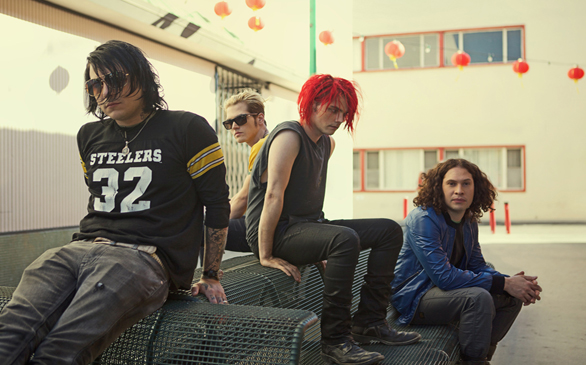 My Chemical Romance Has Ray Guns

An exclusive box set called Danger Days: California Edition 2019 drops on the same day; it includes the full Danger Days album on CD, an EP with three songs by the Mad Gear & Missile Kid, a “Bad Luck Beads” wooden bracelet, a 48-page booklet entitled Art is the Weapon and one of four wearable masks and collectable ray guns.

There are four different sets of matching masks and ray guns, one representing each band member, and the ray gun comes with a clear acrylic display stand so it has its own place when you’re not running around pretending to zap people with it. The box set can only be purchased through mychemicalromance.com and preorders are being taken now.

Two years after its initial launch, rocknrolldating.com has decided to open up its member profiles to the public. Previously, the site only allowed active members of the site who were logged in to see the individual member profiles, but now anybody can search for possible matches and see details of the various members on the site.

“This was not a decision that was made overnight, but after looking at two years worth of data we realized that it’s more compelling to look at pictures and see what people have to say in their own words,” says Daniel House, owner of RocknRollDating. “You still have to be an active member if you want to send messages, add to favorites or forward a profile to a friend. But for those who are still on the fence this just made the most sense overall.”

The free site is said to be the largest source of music-loving singles looking for relationship matches on the Internet.

Tommy Hilfiger Toiletries has joined forces with the Ting Tings to set the latest Tommy fragrance collection, LOUD for him and LOUD for her, to sound. The Ting Tings wrote and produced a new track inspired by the fragrances, “We’re Not the Same.” Perfumer Aurelian Guichard describes LOUD for her as fragile, explosive and tormented.

When comparing the notes of the fragrance to the Ting Tings song, Guichard says, “LOUD for her is built around the strong rose note. In the Ting Tings song it’s as though the lead singer’s voice is like a shouting rose; it has the feel of drumbeats and punk-like bursts of electricity from the guitar. It’s similar to how you would describe the way the patchouli burst onto the scene of the fragrance.”

The company has also launched LOUD Radio where the playlist consists of music by artists that display “a similar DNA to Tommy’s brands.” A free download of “We’re Not the Same” is at Tommy.com/LOUD.

Rekords Rekords, the recently formed label owned by Josh Homme, is about to release the first full-length effort from Mini Mansions, the trio fronted by his Queens of the Stone Age band mate Michael Shuman. The songs on the self-titled release, due Nov. 2, derive from three vignettes, but according to Mini Mansion-er Zach Dawes, the band didn’t intentionally set out to make a concept album.

“There are a lot of different spaces that we like to explore; it’s basically about letting the songs take you and seeing where you can go with them,” says Dawes.

“It’s genuinely psychedelic with huge hooks,” adds Homme. “After listening to Mini Mansions just once you’ll be saying ‘I can’t get this out of my head.’”

Members of classic rock groups Yes and Toto play a benefit show for the Fur & Feather Animal Sanctuary at the Musician’s Institute Music Corridor & Amphitheater in Hollywood Nov. 6. The performance by Yoso will be preceded by a “paw-sta” buffet dinner. Ticket info is at furfeather.org.