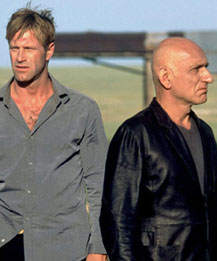 Suspect Zero follows newly demoted Dallas FBI field agent Thomas Mackelway (Aaron Eckhart) who’s forced to come to terms with mistakes he made while hastily trying to arrest a serial killer. The court rules that in his rush to bag the murderer, the agent has infringed upon the culprit’s civil rights rendering his guilt irrelevant. After he’s dressed down in the media for losing the case, Mackelway is reassigned to a new post way out in the boonies of Albuquerque, New Mexico where he’s quickly handed a new murder case before his first cup of coffee gets cold.

Although he’d been raked over the coals for being such an eager beaver, Mackelway becomes engrossed with his new task – a murder that he becomes convinced is interrelated with his former case and leads to Benjamin O’Ryan (Ben Kingsley). Mackelway’s former partner Agent Fran Kulok (Carrie-Anne Moss) is called in to help him sort out the finer points as he continues to backtrack on O’Ryan. Meanwhile, O’Ryan, in his lone-nut’s largesse, starts to fax in sketches and clues that taunt the troubled agent and beg the question, "Why would he do that?"

As O’Ryan, Kingsley is still "bald and beastly," throwing every nervous tick into the role with conviction, leaving the viewer guessing all the way up to the moment of clarity, which breathes life into an archetype that’s been done one fava bean and fine Chianti too many times already. Eckhart’s portrayal of Mackelway isn’t necessarily phoned in but he’s definitely not stretching in the part, and Moss doesn’t really color outside the lines either.

In Suspect Zero, billed as a mystery-thriller, Director E. Elias Merhige takes cues from older flicks like 8MM, Seven and, most prolifically, The Silence of the Lambs. But as The Beatles once said, "There’s nothing you can do that hasn’t been done." Long story short, this is simply a popcorn movie, so don’t expect answers to life’s enigmas wrapped in riddles.