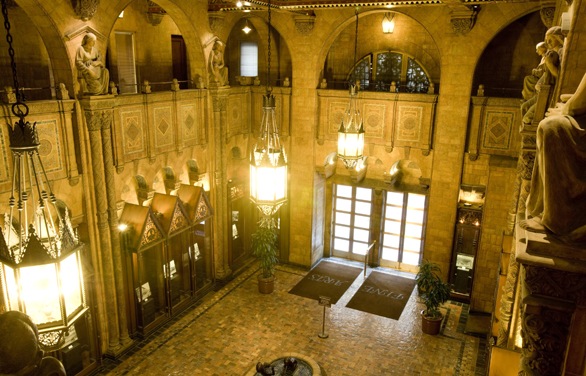 When I moved to Los Angeles in the late 1990s, downtown was nothing more than a 9-to-5 gerbil wheel of professionals, which became a Skid Row ghost town as soon as the businessmen in Brooks Brothers jumped on the 10 at dusk.

Then, Staples Center arrived, followed by LA Live (If you haven’t been to the Grammy Museum, you are seriously missing out.); loft living became cooler (and more affordable) than Silver Lake, Art Walk was suddenly the new place to see and be seen and Hollywood Boulevard bars were abandoned in favor of the Edison, Bar 107, Seven Grand and Golden Gopher. Crystallizing the epic cool of the burgeoning, formerly grand neighborhood was last year’s film, (500) Days of Summer, a cinematic love letter to the area that illuminated both what it had been and what it could be.

For those of you without a Tom to guide you through the architectural wonders lurking above iglesia marquees and jewelry wholesalers, the Los Angeles Conservancy is offering a one-time-only walking tour of Seventh Street, a historic stretch where the majority of buildings date back to 1929 or before. The tour, which takes place on Nov. 7, also grants visitors rare access to residential lofts, stunning rooftop views and a glimpse into our city’s history.

On the agenda, sights include Broadway Plaza, one of the first megastructures in the United States, which is also where visitors see the circular glass room atop the Sheraton Hotel, once a rotating restaurant known as Angel’s Flight and now used only for private events; the Fine Arts Building, revered for its spectacular lobby dating back to 1926; Brock & Co., which was dubbed the “Tiffany & Co. of California;” St. Vincent’s Court, a dead-end street with a surprising history; and Dearden’s, a 100-year-old furniture store in the Heywood Bros. & Wakefield Company building.

From filming locations to hipster heaven loft livin’, Strolling on 7th gives Angelenos a chance to get to know and love their city even more.

For more information, visit laconservancy.org.
Article posted on 11/1/2010
This article has been viewed 1805 times.