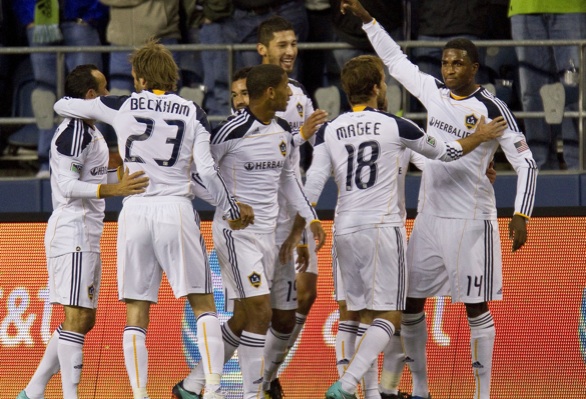 The Galaxy celebrate their goal against the Sounders, a chip shot by Edson Buddle (right).
(Credit: Dean Rutz/SeattleTimes/MCT)

Forward Edson Buddle scored a brilliant goal in the first half en route to giving the visiting Los Angeles Galaxy a 1-0 first-leg playoff victory over the Sounders FC in Seattle Oct. 31.

“It was a pretty classic playoff game where you get a goal on the road and you’re defending and you try to get out of here. That’s basically what we did,” Galaxy head coach Bruce Arena says. “We have to play to win next week.”

Buddle’s 38th-minute goal past keeper Kasey Keller left many astonished because the right-footed potent shot came from 30 yards out.

“I don’t think anyone thought I would shoot from there. That’s why I shot it,” Buddle says of the incredible goal.

Defender Omar Gonzalez received the assist on the play.

“Omar got a good clearance on the ball. I saw that developing. I was able to get a turn on the ball,” Buddle points out. “It bounced perfect, and I took a shot.”

Keller was not pleased with the way the game ended in favor of the Galaxy.

“It’s just one of those things that guys try 100 times in their career and never make it happen,” Keller comments of Buddle’s goal. “And the one time he got it to go was in a big game. Great goals change games, and that’s part of it.”

Along with the great goal provided by Buddle, goalkeeper Donovan Ricketts and the Galaxy defense completely shut down the Seattle squad. For the match, Ricketts made eight saves, including seven in the first half.

“All of the credit goes to my defense. They smothered the Seattle attack,” Ricketts states. “Whatever I had to do, I did just to keep my team in the game.”

Ricketts made crucial saves the entire game, especially in the last few minutes against Nate Jaqua.

Los Angeles will host Seattle Sunday, Nov. 7, at the Home Depot Center in Game 2 of the postseason series. Kickoff is at 6 p.m. in Carson.