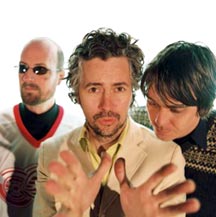 "I had a good system going on," Steven Drozd of the Flaming Lips recalls about how he played the group’s album Zaireeka, for which four CDs need to be played simultaneously in order to properly hear the music. "I had a remote for my stereo, another one for my boom box and my toe on the radio and I’d put my Sony clock radio right in front of me and I’d just go 1,2, 3 boom [motions as if pressing buttons with his two index fingers, the big toe on his right foot and his tongue]. I had all the stereos on extension cords and moved them around the house. I spent a couple of months doing that."

Here’s a middle-aged man explaining the serious practicalities of setting up four CD players to play the same album. Sounds a bit ridiculous, doesn’t it? Actually it isn’t that strange, considering that Drozd explains this in the Knitting Factory Los Angeles dressing room, which is currently packed with giant bunny costumes, large balls full of confetti and miscellaneous puppets, all for a record release party from a band that’s been around for 20 years. It will be a typical Flaming Lips show tonight. With the three band members, vocalist Wayne Coyne, bassist Mike Ivins, and Drozd on keyboards and drums currently performing sets in the rabbit costumes, audiences will be stupefied but hypnotized by the Lips’ antics——as usual.

"It gets hot, man, especially if you’re playing drums in those things," Drozd explains, matter-of-factly.

As Drozd relates the serious pros and cons of bunny costumes, Coyne rummages madly through crates of miscellaneous crap before finally settling on a video labeled "Yoshimi" in black felt-tip marker. "I want to try this with some of the lights tonight," he says to Drozd before scampering off again like a Mad Hatter.

Drozd, shrugs his shoulders, and reaches for a large stack of lithographs that await his signature.

"That’s Wayne," Drozd says as his answer for anything nutty the group does. "The latest thing for our stage set is Wayne got a hold of these 80-pound mirror balls and is sticking them on top of these cement mixers that spin around, and so we’ve got three of these things spinning with lights on them all over the place."

Doodling on each print like a restless adolescent, Drozd explains that Coyne did all of the artwork for the group’s latest album, Yoshimi Battles the Pink Robots. The album stays in the same vein as 1999’s critically acclaimed The Soft Bulletin, but veers even further into the realm of electronica. Though it can be easily seen as a concept record, Drozd and Co. refute the notion. However, with songs about robotic bouts and otherworldly noises, it’s hard not to see the album as at least loosely connected. As Drozd explains, the influence may come from the film that the Flaming Lips are currently making, Christmas on Mars.

"Wayne’s always had this idea in the back of his head of a sci-fi-2001 type of film meets a It’s A Wonderful Life type of crazy film. But he’s one of those guys who’ll imagine something and actually do it," Drozd says.

Expected for a Christmas 2003 DVD release via their record label, the Flaming Lips have written, are starring in, and are scoring the soundtrack to their debut film. Reminiscing over 4 CDs playing one album, wearing a bunny costumes, submerged in disco ball lighting, all while on a break from making a heartwarming sci-fi film. Yep, just a normal day for the Flaming Lips.