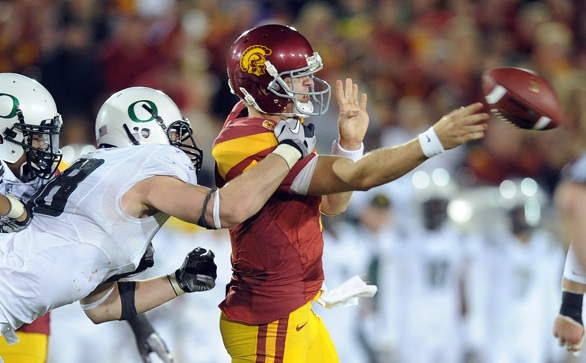 This was their Bowl game. They were supposed to win, but the Trojans could not overcome a highly talented Oregon team. Now the top-ranked squad in all three polls, including the BCS standings, the Oregon Ducks collected a 53-32 victory over USC at the Los Angeles Coliseum Oct. 30.

The Trojans kept up with the Ducks for most of the game, but big mistakes cost the hosts a desirable win. With a 17-15 lead, USC sophomore quarterback Matt Barkley fumbled the ball on the shotgun formation. Apparently, someone on the sidelines called Barkley as he turned his head to look when the ball was snapped.

“It all went downhill from there,” Lane Kiffin says of the coaching mishap. “That was me. That was a coaching job.”

Indeed, it was because the Trojans could have gained more momentum with another touchdown score. Instead, the Ducks capitalized on the turnover and captured additional confidence in their pivotal road game when quarterback Darron Thomas connected with Jeff Maehl for a 45-yard TD score, making it 22-17 Ducks at 6:45 in the second quarter. USC’s last edge came with 11:19 left in the third quarter when Barkley scored on a one-yard run.

“You could feel the momentum on our sideline,” he says. “We had it, and we didn’t capitalize on it.”

However, the Ducks then amassed 24 unanswered points, and the Trojan offense became nonexistent. Although the Trojans controlled possession of the game for five minutes longer than the opposition, the Ducks had 599 total yards and 29 first downs. That includes a nearly 65 percent success rate in third-down conversions.

“Their tempo is real fast, and they don’t slow down the whole game,” USC defensive back Shareece Wright says. “They didn’t even run a lot of plays. They just run them to perfection and wait until the defense breaks down.”

Barkley passed for 264 yards on 26-of-49 attempts with one touchdown, but had two interceptions. Both the running and receiving aspects were virtually shutdown in the second half for the Trojans.

“Our team feels like they get stronger as the second half goes along,” Oregon head coach Chip Kelly says. “It’s great for this group of guys. There’s no panic.”

For the Ducks, Thomas had 288 passing yards with four touchdowns, while running back LaMichael James rushed for 239 yards on 36 carries, including three TDs.

With a 5-3 overall record and 2-3 in conference action, the Trojans look to bounce back Saturday, Nov. 6, as they entertain the Arizona State Sun Devils at 7:30 p.m.

The UCLA Bruins came close to upsetting yet another ranked team, but the Arizona Wildcats had enough in their tank to earn a 29-21 win at the Rose Bowl in Pasadena Oct. 30.

Arizona sealed the affair in the last few minutes of the fourth quarter, and the Wildcat head coach recognizes that.

“We had a chance to put them away, but they kept us out of the end zone,” Arizona’s Mike Stoops says. “We moved the ball and controlled play, but they suckered us on two big plays.”

Arizona did not allow UCLA to even knot the score thereafter, but the Bruins fought until the end when kicker Alex Zendejas netted a 31-yard field goal to relieve the Wildcat sideline and hand the team a 29-21 lead with 1:18 remaining in the game.

Scott had 319 passing yards, and Keola Antolin rushed for 111 yards. UCLA’s Richard Brehaut threw for 228 yards and two TDs, while receiver Randall Carroll made three receptions for 90 yards and one TD.

“Going into the game, we talked about effort and execution, and the effort was terrific,” he says. “We didn’t have enough to get over the hump. I’m very proud of the effort, but it wasn’t quite enough. There has to be great execution as well.”

UCLA’s next challenge is this Saturday, Nov. 6, as they host the Oregon State Beavers at 4 p.m.