Lakers Off to Hot Start 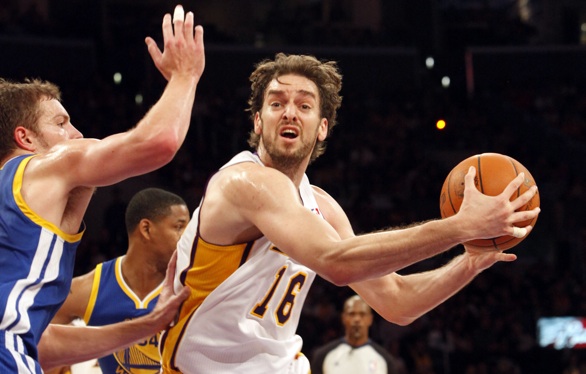 The offense is a machine. The defense is a strong asset. The starters are the best five in the league. The bench and depth make the difference this season. Phil Jackson, Kobe Bryant and the Los Angeles Lakers are off to an impressive 3-0 start this season, having defeated the Houston Rockets (112-110), Phoenix Suns (114-106) and Golden State Warriors (107-83).

“We’re 3-0, but that’s nothing to go by at this point in the season,” Bryant says after the big victory over the Warriors at the Staples Center Oct. 31.

For that particular game, Bryant scored 20 points and had seven rebounds in just 27 minutes of play. He claims his knee is 100 percent now, which is intended to silence the critics.

Both Pau Gasol and Lamar Odom have been effective and efficient on both ends of the court. To further illustrate that, Gasol contributed 26 points against the Warriors as he pulled down 12 boards and chipped four assists.

“We’re pretty happy with how things are going right now,” Gasol states after the win over the Warriors. “We’ve been pretty successful against them the last couple of years, but the thing you can’t do is relax. If you fall asleep, they can score a lot of points.”

Odom, on the other hand, has been remarkably solid thus far. He pounded 16 points and 14 rebounds against Golden State.

Jackson was not as content as others with the triumph.

“I usually make a little litany about being able to play 30 to 35 good minutes at this time of year while you’re building up that stamina and that team identity,” he says. “Other than that, not bad.”

The Lakers’ ability to have multiple players in double figures, defend well collectively and individually and play disciplined basketball has sparked a perfect record thus far. The bench mob and their depth have been essential in separating the unit from the rest of the teams in the NBA.

Los Angeles is the clear favorite to win the NBA championship for a third consecutive year. The acquisitions of Steve Blake, Matt Barnes, Theo Ratliff and both rookies – Devin Ebanks and Derrick Caracter – have made the group deeper, stronger and more energetic than ever. On top of that, everyone is hungry to equal last year’s success.

After all, the organization, the city and the fans deserve it again.