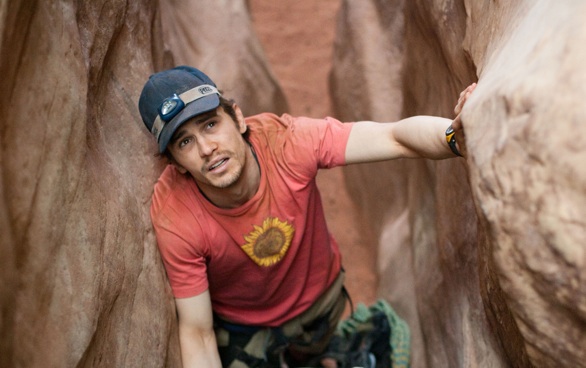 Into each life, a little rain must fall. These words have been known to make even the most frustrating situation seem bearable. But for adventurist Aron Ralston, this saying would resonate more than anyone could ever imagine. At the age of 27, the avid climber set out to conquer the rocky terrain of Bluejohn Canyon. Midway through his journey, he encountered a couple of girls with whom he instantly became friends. Ralston was like a lot of 20-somethings – he felt that he was invincible and perhaps even impervious to death or pain.

After parting ways with his new acquaintances, he took a shortcut through the canyon. The rocks shifted and suddenly Ralston found himself trapped. A large boulder had fallen onto his right hand, rendering him unable to move. For 127 hours, he was helpless as his life began to slip away. Ralston documented what was happening to him by filming himself, trapped. He said his goodbyes and left important information to his friends and family regarding insurance policies and where they could find the stuff that he’d borrowed from them over the years.

Then, something inside him snapped. Just as his body started to give out, Ralston decided he would not die. So, he did the unthinkable. He took out a blade and cut off his own hand, then ran like hell until he was discovered by a family who just happened to be on the trail at the same time.

Ralston chronicled his endeavor by writing a well-received memoir titled Between a Rock and a Hard Place. That book is the basis of the film 127 Hours. James Franco brings Ralston to life on the big screen as a young man full of hubris who learns the lesson of grace under extreme circumstances. Academy Award winner Danny Boyle (Slumdog Millionaire) directs his performance. Boyle and Franco are partnered perfectly; the actor’s brilliant on-camera intensity is an even match for Boyle’s gritty and uncompromising style. However, both were very careful not to make Franco’s portrayal a blatant impersonation.

“Danny’s take on the movie was that it was really about penetrating this incredible situation Aron finds himself in,” explains Franco. “So we didn’t want it to be about trying to recreate a real person but, rather, about trying to really feel this human experience.”

For Boyle’s part, he brought along much of the team that helped make Slumdog such a success. Screenwriter Simon Beaufoy combined humor with heart to make Ralston’s words and experience compelling, despite the fact that the audience is spending nearly two hours watching a grown man talk to himself. Boyle was also cognizant of the need to keep the momentum sharp based on the nature of the material.

“We made the decision to use two cinematographers – Anthony Dod Mantle, who shot Slumdog Millionaire, and Enrique Chediak, who shot 28 Weeks Later – because we needed multiple approaches and because the camera, in a sense, makes up for the fact that there are very few other characters in the film,” notes Boyle.

Ralston gave the film his ultimate stamp of approval. He and Franco had the opportunity to interact with each other prior to shooting. They met at the Four Seasons Hotel in Beverly Hills in 2009 and watched an early-completed version of the movie.

“He’s my brother in ADD,” jokes Ralston, regarding his relationship with Franco.

Despite the pain and fear and horror of his situation, the Aron Ralston of today seems to be a very well-adjusted guy. He recently became a father and a husband and sees his ordeal as a matter of destiny more than anything else.

“At some point, I think I was bound to get to a point where it went too far, on some mountain or river or canyon,” explains Ralston, “At the same time, there was this up side that everything I had done in my life, everyone I had known now became a resource for me, something to draw on in order to survive and afterwards, to flourish.”

As for Franco (who has been known to method act his way to box office gold), he admits that his time with Ralston produced similar on-screen results.

“We methoded the fuck out of it,” he teases.