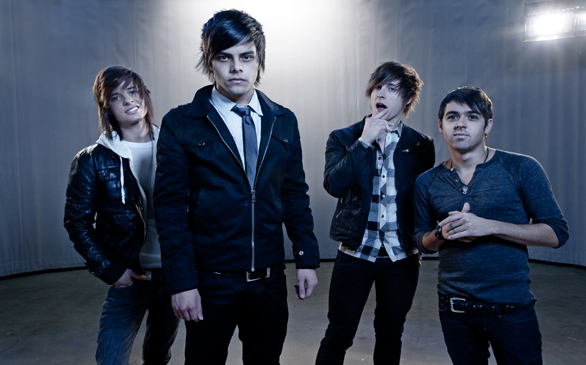 Remix albums carry a bad connotation, that’s no secret. We know it, and the members of There for Tomorrow do as well. Which is exactly why it’s a good thing they’ve taken it upon themselves to make one.

Yep. The Warped upstarts have a remix album. And y’know what? They pull it off. Like, really well. If you wrote the Orlando foursome off as just pop-punk, prepare to be proven wrong in a very loud way with this EP, which mixes reworked versions of songs from their A Little Faster album with a few new tracks.

New song “Small World” captures the magic the band traditionally brings to their albums and the stage, though it also showcases a new aural maturity at the same time. Frontman Maika Maile’s intimate lyricism on this and “Soul Full Solace” perfectly balances his sweeping vocals and guitarist Christian Climer’s anthemic arena rock shredding.

“Re:Deathbed” is drummer Chris Kamrada’s song to shine on, darker and more haunting than the original with the addition of dubstep-meets-hip-hop beats and synth accents, though “Re:Stories” might be the EP’s standout track. Moody and atmospheric, the band effectively made a quintessentially Warped-type song into an adult-sounding jam that shows technical mastery without losing the original’s emotional intensity.

Though the band’s understanding of song arrangement is impressive, some songs might just be too ambitious. While “Burn the Night Away” was originally a beautifully written and vocalized acoustic track, full of raw introspective emotion, the manically paced “Re:Burn” loses that heartstring-pulling connectivity amid distortion and dance club beats.

Some of the remixed tracks may stand out more than others, but the promise and potential shown on this EP bodes very well for whatever the foursome have in store for their forthcoming full-length.