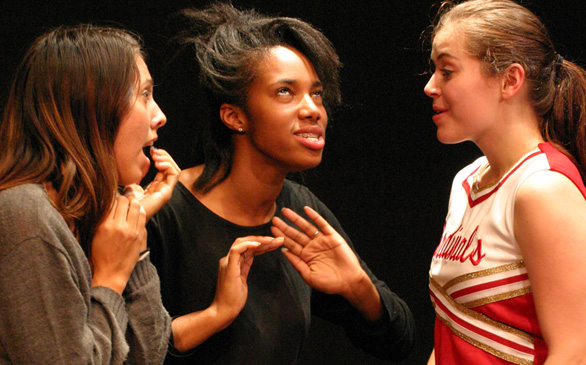 We all remember what it was like to be a teenager in high school. Popular or not, we experienced our share of personal trauma. The Odyssey Theatre is showcasing real stories written by actual teenagers in “Bloody Red Heart.”

The play is based on the book RED: Teenage Girls in America Write On What Fires Up Their Lives Today. Amy Goldwasser, author of the best-selling collection of essays, collaborated with Tom Bryant to write the stage adaptation.

“It magnifies what really goes on in teenage girls’ lives. On the page you imagine it differently than what is performed,” tells LACC student and cast member Deborah Senior. “The book is awesome. It is really great. I think that the play portrays that in a very truthful way, in a way that nobody sees coming.”

Ahsia Taylor and Senior are two students in the cast who have been a part of the show since its 2007 beginnings. A few years ago, Taylor participated as the assistant stage manager while Senior played the role Taylor is currently playing.

“It helped a lot because I know the play inside and out now,” Taylor says. “My biggest problem for actually being in the play now is I saw how all the other girls did it, and I have the way they did it stuck in my head. So I had to break out of that. I was like, ‘I need to try my own tricks.’”

“Everyone in the room is irritating her. Even going to lunch, the lines are long and she just wants to eat,” explains Taylor. “It’s like ridiculous teenage drama where everything is the end of the world to you.”

Taylor’s second character, which Senior previously played, is a teenage writer from New Orleans who lost all of her passionate writings in Hurricane Katrina.

“She just tells what she went through and how it made her feel,” relays Taylor. “I cry every day because it’s so passionate. The girl wrote it really, really well.”

Although Taylor was not a victim of Hurricane Katrina herself, she saw firsthand the effects it caused.

“I went to school in Houston when that happened, so a lot of the people actually went to my school,” shares Taylor. “And just seeing them, the poor things were so disturbed and they brought a lot of drama to the school.”

Senior also portrays a difficult character. Her role involves a scene in which she speaks out about how her father beat her and how it affected her.

The show is acted out by eight actresses, which presents some challenges.

“All eight girls are on the stage at the same time throughout the entire show, so we all have to work together on everything,” says Senior.

“‘Bloody Red Heart’ is performed as a series of both monologues and scenes from the book RED. It’s definitely a collage type of thing,” adds Taylor. “Sometimes we’re acting out what the girls are talking about and sometimes one person’s just telling a story and just getting it out to the audience. Amy took a bunch of pages out [of the book] to where it could be a play. The stories are kind of similar, but there’s a lot taken out. Teenage girls can see that there are a lot of people that either have the same issues that they’re going through or things that are way beyond anything they can think of, just stuff they can relate to. It’s to feel like your world is not ending; other people are going through it. It’ll be OK in the end.”

“Being a part of this show is really eye-opening not only just for me but to my audience members,” Senior states. “When I had performed it before, there were so many girls that came up and said, ‘Thank you.’ It’s just really eye-opening for what a girl goes through.”