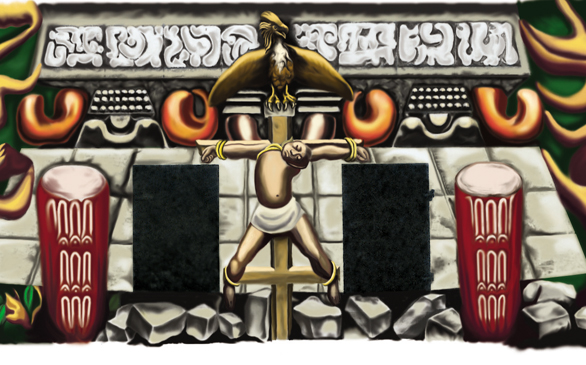 A truly innovative artist can create work that can unite people as human beings, no matter what age, sex, ethnicity or religious background. Artists strive for this general appreciation and they normally produce work that can transcend time and become just as popular, if not more, as the actual artist.

David Alfaro Siqueiros was one of these artists who saw unspeakable travesties, leaving behind his family and art school to fight as a young soldier in the Mexican-American War. Siqueiros would again stare into the face of adversity in his life for his political views but managed to communicate to the world the ideals that gave his life structure and meaning. Even 36 years after his death, Siqueiros’ works are prominent throughout the Americas and still convey an ideal or belief that is relevant to people living today. Even though we are unable to speak directly to Siqueiros, we can learn about his life goals through those who perpetuate the ideals he lived by.

Dr Jonathan Spaulding, not only a huge proponent of bringing Siqueiros’ work to Los Angeles but also the lead curator for the exhibit, Siqueiros in Los Angeles: Censorship Defied, states, “We think that it’s something that really speaks to the mission of the Autry [National Center]; the idea of connecting past with present to inspire our shared future. It’s emblematic of the history of Los Angeles, but also the struggle over defining that story and who gets to have the means to express their interpretation of the past.”

The Autry National Center and the Autry Museum of Western Heritage has amassed quite a collection of Siqueiros’ work, both from the artist himself and those who knew him personally. The gallery walls feature an awe-inspiring collection of paintings, sculptures, sketches, photographs and lithographs that have all been brought to the museum via the helping hands of Amigos de Siqueiros, pioneers for the preservation of Siqueiros’ 1932 mural America Tropical, which in 1938 was censored and whitewashed from walls of the Italian hall across from Olvera Street.

Spaulding explains, “As you look through the story line, you see the connection between what’s been going on in 1932, but even before in the history of the West and what’s going on today. The struggle, the conflicts, challenges and the controversies are remarkably similar and we are in a historic moment that resonates with the 1930’s L.A. So it’s very timely with what’s going on.”

Lynn La Bate was the brave soul who breathed life into the Siqueiros exhibit at the Autry.

“I think the exhibit has works of art that are important to the younger generation to understand the history of Los Angeles, and we’ve tried to be inclusive,” she says. “This is what the Chicano and civil rights movements were saying, ‘Recognize us,’ and these are definitely works that also say, ‘Recognize us.’ We are not foreigners. People don’t understand that about the Chicano community that people were born here. We are all part of a fabric of Los Angeles. I’m hoping students come here; it’s food for thought. It’s also such a great way to learn Los Angeles history.”

The exhibit at the Autry also features a monthlong plethora of talks and movies to educate yourself about David Siqueiros and his extraordinary life. One can only hope to take away something powerful from this exhibit.

La Bate hopes for the same: “Another issue we are seeing in L.A. is that some of the iconic murals are being graffiti’d over. In the old days when the murals were painted, there was a respect. I wish graffiti artists could come and learn about some of the pioneers of the mural movement and start formulation or strategy so that murals can be respected and graffiti art can be respected; so that artistic expression is meaningful, and I’m hoping that message will come through.”