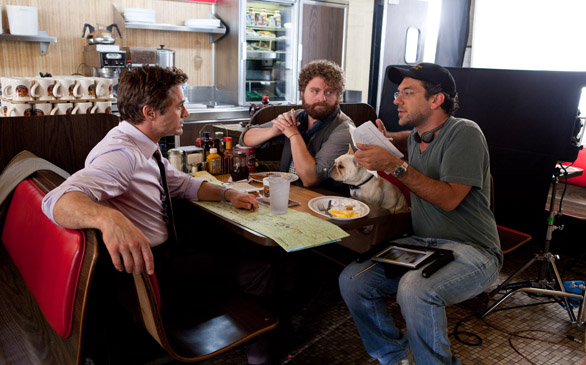 If you want to be schooled in comedy, get ready, because class is in session and you will be tested on this later.

Lesson No. 1: “People who are like a truck with no brakes are inherently funny.”

So decrees Zach Galifianakis when discussing his new movie, Due Date.

The film, which reunites Galifianakis with his Hangover director Todd Phillips offered the comedian the chance to go mano y mano with Robert Downey Jr. who stars as a high-strung father-to-be forced to hitch a ride across the country with a trainwreck aspiring actor (Galifianakis) in order to make it to his child’s birth on time.

Looking over the trio’s cumulative bodies of work, you realize these men are responsible for some of the funniest moments in recent film history. Perhaps that’s why Due Date is drawing inevitable comparisons to the comic classic, Planes, Trains and Automobiles, another odd couple road comedy.

But Phillips, looking polished and professional sporting a crop of short salt and pepper hair usually hidden under the curly black wig he sports in cameos as “Mr. Creepy” (The Hangover) and “Gang Bang Guy” (Old School), says the movie they feel the most related to is “in an odd way, Rain Man.”

“It is a road movie, [but] at its core, it’s about Zach’s character having just lost his father and Robert, who’s about to become a father for the first time, and why they needed to meet at this moment,” Phillips offers in a moment of surprising sincerity.

Asked why the theme of fatherhood was appealing to a “Frat Pack” director whose films usually center on men clinging to their faded youth, Phillips replies, “I started making movies about college kids, and I tend to grow with my movies; they’re always about my age range. That’s the next step in life: fatherhood. It seemed like an interesting thing to mine, both for emotion and comedy.”

Much like Bradley Cooper in The Hangover, when asked about his part, Downey Jr. admits he was sort of playing Phillips, though, he adds, “Every time I feel I really hit critical mass is when the director and I become a third thing, and that’s the character. I always feel I’m playing an aspect of the director – an appendage – especially when he’s an auteur. It’s a way of making him a proud parent.”

Phillips is quick to respond by lavishing praise on his star, applauding Downey Jr.’s “producerial brain.”

“He made me a better director because he’s constantly challenging what we’re doing in the larger, bigger picture. Robert thinks of the movie as a whole. He’s basically another writer in the room,” Phillips says. “Not to discredit the writers.”

“No, it’s a great script, which made me hate it even more,” Downey Jr. smirks.

“Yeah, Robert has an aversion to all things typed, I’ve learned,” Phillips replies. “Even if we just rewrote the scene on a napkin, he felt better about it.”

Phillips explains that he and Downey Jr. had “lots of spirited discussions” over the material, which they crafted and re-crafted as they shot.

“Every morning, [Robert would] have the [day’s script] and say ‘OK, what are we really doing?’” the director recalls.

“And [Zach] was like a hostage child we’ve taken who’s watching dad and dad just hash it out,” Downey Jr. says, laughing at the memory.

“Yup, each morning there was a meeting,” Galifianakis nods. “Todd yells, Robert yells back. There was a discussion for at least an hour—”

“But, to be honest, this was the most healing project I’ve ever worked on,” Downey Jr. says. “I’ve never come up against anyone who is so confident and thoughtful and spontaneous. He’s just in a class by himself. And Todd is the best director I’ve ever worked with, bar none.”

“Did you all get that?” Phillips deadpans.

“And did you get what he said before it?” Galifianakis asks, before turning to Phillips and admitting with a laugh, “You know, I thought he was talking about you the whole time but then he switched over!”

Due Date releases in theaters Nov. 5.