For Colored Girls: Loretta Devine is the lady in green. 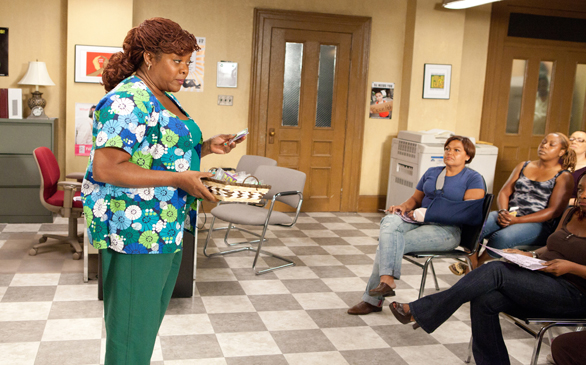 Loretta Devine has created some of the most memorable roles in theater, film and television, but despite a 40-year acting career, the actress still has a hard time watching herself on screen.

“I have a hard time watching myself, because I am very critical of what I look like,” says Devine, who first captured national attention as Lorell in the original award-winning Broadway musical Dreamgirls.

A five-time NAACP Image Award winner, Devine plays a nurse in Tyler Perry’s latest venture For Colored Girls, which is based on Ntozake Shange’s award-winning Broadway play titled “For Colored Girls Who Have Considered Suicide When the Rainbow is Enuf.” Unlike the original play, which featured several women known by colors who performed a collection of poems, Perry’s adaptation has given each of the characters names.

“The color in this, the way Ntozake wanted it to be, is the colors of the rainbow; blue, red, green and orange. So For Colored Girls, the colors are colors of their emotions more so than their race,” says Devine, whose character, Juanita, is identified by the color green. “She has a wellness clinic, which she is trying to get funded, and she gets introduced to Janet Jackson’s character, who gives to a lot of different charities.”

A movie that weaves together the stories of several women who deal with subjects such as love, abuse and abortion, For Colored Girls boasts a stellar cast that includes Whoopi Goldberg, Anika Noni Rose, Phylicia Rashad, Kimberly Elise, Thandie Newton, Kerry Washington and Tessa Thompson.

“The play was just dancing and poetry, and the movie is totally different,” Devine continues. “What Tyler did was create a movie that included the poetry used in the play. So the poetry is intact, and the characters are created around the poetry. You are introduced to nine different women and the circumstances of their lives. My character is in love with a man named Frank, and the paradox of it is that I teach the young girls in my clinic one thing and I live another. This piece has been done by an all-white cast of girls as a play, and all women can relate to it.”

Although Devine, who has a master’s degree in Theater Arts from Brandeis University, has a method when it comes to creating her screen characters, she still found her part a little challenging.

“The challenge with this was the poetry. I have one of the greater poems that she did, and it was emotional rather than physical, for I am with a man who is playing mind games with me. For me, it’s usually a manner of studying the piece and deciding what I want her accent to be, focusing on the person, learning the lines and making it sound like conversational dialogue.”

A fan of Perry’s work, Devine’s decision to join the cast stemmed from a personal phone call the writer/director made to her.

“I have been a groupie of Tyler’s plays ever since I can remember,” she says. “He has this incredible ability to make people relax and enjoy themselves. There is nothing better than going to a theater and enjoying Madea. Tyler has made a 180 degree turn, and this movie is different from what anybody would ever expect to see him do.”

Shot in 30 days, For Colored Girls presented an opportunity for Devine, who also stars in the medical drama “Grey’s Anatomy,” to spend some quality time with her co-stars in what she calls a “bonding moment.”

“We see each other on television and films and never get a chance to spend time with each other, and got a chance to bond and talk about our different careers. It was really a wonderful and memorable experience,” shares the actress. “Everyone should see this movie, because it’s a historical moment in that I don’t know when you will see 10 black women working together again. It’s a brilliant and incredible piece and has some of the best actresses in the industry in it, and it’s going to change the lives of people who see it.”