Megamind: Will Ferrell gets the blues. 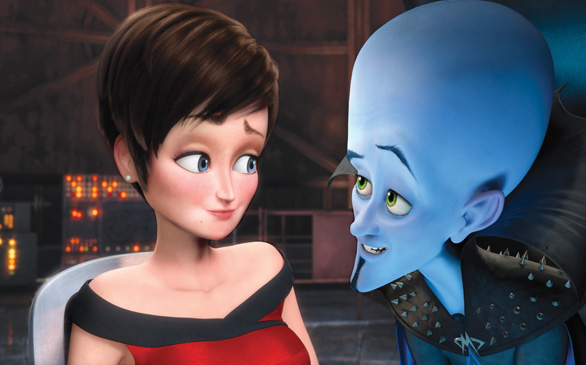 A press conference with Tina Fey and Will Ferrell isn’t the place you want to be if you’re looking for any sort of James Lipton-y answers to questions about the performer’s “craft.” Parked in what appears to be a wedding reception tent (the first inspiration for many jokes to come) at the back of the Four Seasons in Beverly Hills on a cold, blustery October afternoon, Fey and Ferrell are doing what they always do: making people laugh. Even if it means totally disregarding the matter at hand – which should be discussing their new animated film, Megamind.

But what else would you expect from the former “Saturday Night Live” cohorts who were responsible for some of the best comedy that show had seen since the early ’90s when Mike Myers, Adam Sandler, Dana Carvey and Chris Rock where churning out sketches like “Wayne’s World,” “Coffee Talk” and “Opera Man?”

Megamind is the latest 3-D animated offering from DreamWorks, whose last film, How to Train Your Dragon, set a new bar for those looking to contend in the genre. Produced by another comedic dynamo, Ben Stiller, the movie is about Megamind (Ferrell), the most brilliant and committed supervillain the world has ever known – and also the least successful. Over the years, the bulbous-headed blue villain has tried to conquer Metro City time and again, failing epically thanks to a caped superhero who has taunted him since childhood, Metro Man (voiced by Brad Pitt). But when one of Megamind’s evil schemes actually goes according to plan, he’s forced to re-evaluate his life choices, especially when it brings him closer to Metro City’s comeliest reporter, Roxanne Ritchi (Fey).

“I am one of America’s foremost fake reporters. I’m gonna have a fake show on CNN,” Fey deadpans before straightening up for a moment to deliver a half-serious answer. “It was fun to step into this very archetypal Lois Lane character. I really liked that in this story she’s a modern version of that; she’s active and intelligent – and she looks like Sharon Osbourne, a young Sharon Osbourne.”

Director Tom McGrath (Madagascar) explains that the original concept for the movie was born out of the seed question: What would happen if Superman were out of the picture and Lex Luther and Lois Lane realized they had more in common than they thought? Asked whom she’d be more likely to go after, a studly caped crusader like Metro Man or a misunderstood evil genius who looks like a Smurf Conehead, Fey replies, “I think I would go for Megamind. He’s very smart, and I really do find the purple undertones of his skin attractive. Beautiful skin. And he’s smaller than me. I like that; I could physically dominate him!”

“He is more petite,” Ferrell agrees.

As for her own rendering as Roxanne, Fey only has the kindest words for her avatar.

Attempting to swing them back toward the film, the subject of recording sessions is raised and, shockingly, the pair settles down long enough to offer thoughtful, composed, un-ironic answers.

“I found the recording sessions very freeing because you can really try things,” Fey says. “When you’re filming something, if you’re improvising on film, you don’t want to waste film and waste [the] cameraman’s time. If you’re recording things first, you can try a bunch of stuff and it doesn’t matter how you look when you’re doing it; there’s no vanity. I found it really fun.”

“There is a great amount of freedom, feeling you can come up with things on the spot,” Ferrell seconds, before adding, “What is lost in these projects is how hard it is to articulate any sort of emotional gearshift just with your voice. Those are the hardest parts for me. Playing the comedy is one thing, but I think there’s real skill for actors who can effectively do that.”

But then, just as quickly as they settled down, they’re off and running again, offering answers like this one from Ferrell: “Traits that I share with the character? There is a part of my body that I cannot go into detail on that is blue.”