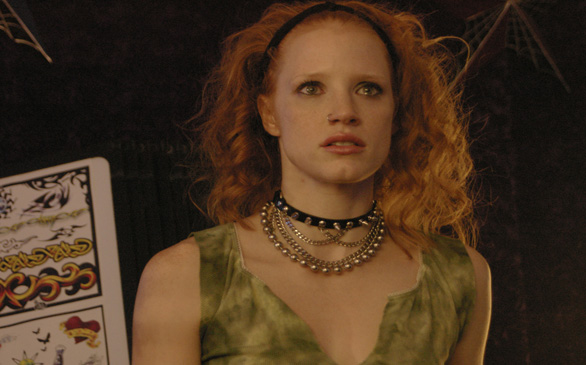 It isn’t enough for a narrative to tell one story any more. The twisting and turning of plot, the fragmentation of perspective and even the centralization of the protagonist cause modern films to stray from the beaten path of cohesive storytelling. Winding along like many coming-of-age stories, Jolene doesn’t focus on the loss of innocence or preponderance of morals in the face of sin and promiscuity. Instead, the film works a little harder to be so deep, a trait that is both overly exemplified in modern cinematic works and underappreciated by modern critics.

What does that mean exactly? Just that maybe everything in life does not have to allude to the ethical state of current culture. Jolene, played by a beautiful, ginger-haired Jessica Chastain, is our equivalent of a moral compass, except she doesn’t have a tendency to make the moral or even right choice. When we are first introduced to Jolene, she is recently married and just celebrating her 16th birthday. Her husband is a sweet boy grieving the recent loss of his mother, and they live with his uncle and aunt (Dermot Mulroney and Theresa Russell).

Naturally, Jolene’s fresh beauty attracts her new uncle, and their tryst inevitably causes Jolene to use the L-word. When they are found out, he is convicted for an obvious crime (She’s still only 16.), and she is sent to a girl’s juvenile delinquent center where she meets Cindy (Frances Fisher), who is a counselor at the center and who also falls in love with Jolene.

She escapes this romantic trap only to leave South Carolina and fall for Coco Leger (Rupert Friend), a tattoo artist, guitar player and overall bad boy with a past that eventually ruins their quickie marriage. She moves on to become an exotic dancer where she meets Sal (Chazz Palminteri) who has acquired questionable wealth from his Vegas lifestyle. Unfortunate circumstances then send her to Brad Benton (Michael Vartan), a Bible-thumping hypocrite and Tulsa’s richest bachelor who is her last conquest and tragic letdown at the old age of 25.

Needless to say, Jolene is a longer story than the two-hour running time allows. Based on the short story by E.L. Doctorow, there is too much plot revelation to do well. Characters enter the story at their own peril, and all but the title character make it out unscathed. However, the material is a vessel for Chastain who shows her versatility and on-screen charm. Director Dan Ireland has a winner in Jolene, which may not be a succinct character study, but it makes for one hell of a story.