The Adored: Entice Listeners to Have a Ball 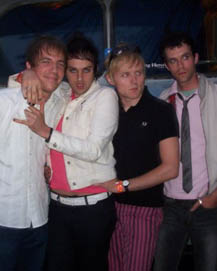 It’s a long held adage that it’s nearly impossible for a band to attain a zealous following in L.A. Yet, is it still possible for Angelenos to be passionate music fans? The Adored, a two-year local mainstay, responds with a resounding, "Yes!" And the way they do it is quite simple: Pass on the devotion to music you have to others; it can’t help but be infectious.

Named, in part, as an ode to Stone Roses’ song "I Wanna Be Adored," The Adored are happy to concede to not being above the artists whose sound they evoke. "We wear our influences on our sleeve," says singer Ryan George.

These influences include everything from Buzzcocks, to The Clash, Wire, XTC, Gang of Four and The Jam. "People like what we do," George continues, "and that’s awesome. We knew that they would because those are the bands that we’re passionate about."

Formed in 2002 following George’s and drummer Nat Keefer’s break from the hardcore scene, they solidified the quartet with the addition of bassist Max Humphrey and guitarist Drew Seventeen. The foursome quickly began playing with The Blood Arm and Ashbury, as well as other local post-punk revivalists. But, as George points out, their intention is not to help drive this renaissance.

"I think a lot of bands these days have just jumped on the bandwagon and tried to ride it. It doesn’t have anything to do with us."

In an ever-expanding circuit of acts that sound increasingly repetitive, The Adored stand out because each of their songs – a quick punch of dance-y, new-wave energy – has an identity of its own. Some songs are forward assaults that barrel through with near ecstasy, while others have subtle breakdowns and slower percussive codas.

Hearing the songs performed live, you’ll probably notice fans giving into their urge to keep moving along to the sound of The Adored’s short, energetic set. "That was a big point with us," says Keefer. "We want to make sure we have fun onstage when we play."

The Adored’s overall aesthetic is to play with joy and to have a ball – and hopefully everyone else will have one too. Their onstage openness seems to be a product of a belief in their own music. "Most people don’t back it up," says George of other bands’ live performances. "You just have to put everything you’ve got into it; there’s no way it can’t work."