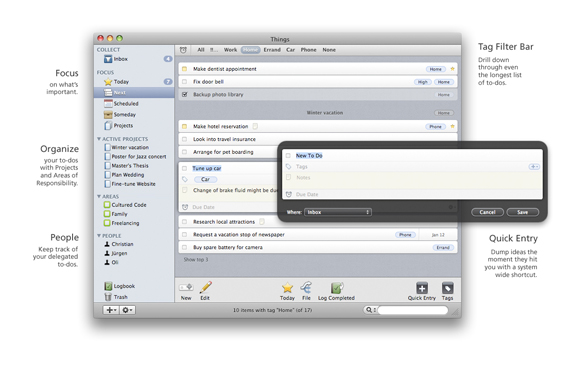 Organize your to-do list on your computer, iPad, iPhone and iPod.

Things: There are a lot of task management programs out there, but Things may be the best. Right off the bat, one of its most useful features is that it can be synced between your computer, iPad, iPhone or iPod Touch. Take your to-do list with you, so you never forget something while you’re out.

A lot of these types of programs get bogged down in extraneous features or require pointless amounts of organizing and typing in of information. Not Things. Its interface is intuitive with plenty of shortcuts and smart-type help. One ingenious feature is the ability to schedule repeating events. Whether it’s a yearly reminder of birthdays or a weekly meeting, Things will automatically add it to your day’s events on the correct date.

Its focus on efficiency is first and foremost. Too often task management programs become about inputting the tasks rather than crossing them off. A simple keystroke brings up a quick entry window from any program, which can even automatically copy select text, say from an e-mail, into a new task.

Perhaps its greatest feature is its flexibility. It provides the skeleton of an organization system, but within that framework allows for creativity in how you want to break down your tasks and what information is displayed. Tasks can be grouped by tags (such as priority or location) or by areas of responsibility.

The program’s flexibility also allows you to incorporate many separate files you may have crowding your desktop, such as lists of movies to rent, grocery lists, etc.

While its bare-bones style is one of its perks, its lack of a more visual presentation also leads to its few shortcomings. Although Things can be synced with iCal, a calendar view of future events would eliminate the need for the other program altogether.

One major improvement would be the ability to add a sub-task to an existing task. As it is, you have to create a new project in order to have subordinate steps within a given task. While this is easy to do with the program’s drag-and-drop feature, these steps are not distinguished visually as such, for example with an indentation, as in the common outline style of other programs. The project method also limits how the tasks can be ordered in the Today window.

Still, the program’s long list of excellent features outweighs any of its faults. Given the thoughtfulness that went into the initial design, I’m sure helpful improvements will be added in subsequent versions. culturedcode.com/things

“Tetris Party Deluxe” (Wii/Nintendo DS): This isn’t your daddy’s “Tetris.” With over 20 different modes of gameplay plus multiplayer and online play options, the world’s most popular puzzle game just got a lot more complicated and a lot more fun.

Taking a cue from “Mario Kart,” multiplayer mode allows you to employ 13 different items to bomb your lines, cover your opponent’s screen in smoke or even freeze his screen. You can play against three local players or up to five over WiFi.

The different game modes include the Field Climber, helping a climber scale a mountain of Tetriminos, Shadow where you match the Tetriminos to their silhouette and Stage Racer. Each of these game modes has enhanced features in this new edition and allows you to use the Wii Wheel, Balance Board and the Wii Speak. tetrisparty.com

PodFlexPro: With the holidays approaching, passing the time during air travel will be a top priority. IPods and iPhones help, but holding up something even as lightweight as an iPod for the length of a movie can be irksome. That’s where the PodFlexPro comes in.

You can form the PodFlexPro around an upright tray table on an airplane or over the magazine holder on a treadmill. A pouch at the end with a clear plastic cover holds your device with holes for earphones and a dock connector.

Finding the input jack for your headphones takes some work but isn’t impossible (It’s easiest to just go through the larger dock connector opening.). Once your device is in the pouch, the plastic cover allows you to work the touch screen, but it does interfere somewhat with the response, so it is best with a movie rather than shorter videos that you have to do a lot of clicking with. podflexpro.com