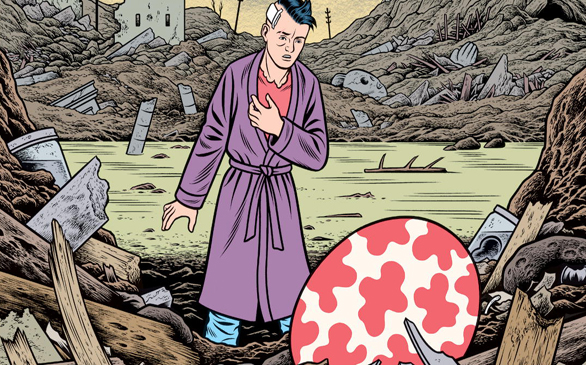 Charles Burns is a master of unease, his work is the comics equivalent of a bad trip. His previous graphic novel, the massive Black Hole, portrayed teenage anxiety through a surreal, nightmarish lens. In it, a sexually transmitted disease that turns the infected into disfigured mutants spreads through a high school, leading to murders among the group of outcasts.

X’ed Out, Burns’s latest, proves to be no less unsettling or epic. This first volume introduces a tantalizing romantic mystery set in an uncanny world. One night, the protagonist, Doug – strung out on pills, living in his parents’ basement – follows his dead cat through a hole in the wall and into a William S. Burroughs-esque world populated by giant lizards. Subconscious dreamscape cues point to aspects from Doug’s past, which the reader starts to assemble piecemeal into a mosaic of an ill-fated romance.

Burns, who is known for his distinctive pen and ink style, tries his hand at his first color work. The result is beautiful. The only thing wrong with this first volume of X’ed Out is that it is too short. This complex, engrossing work will leave you craving the next installment.

X’ed Out is currently available.