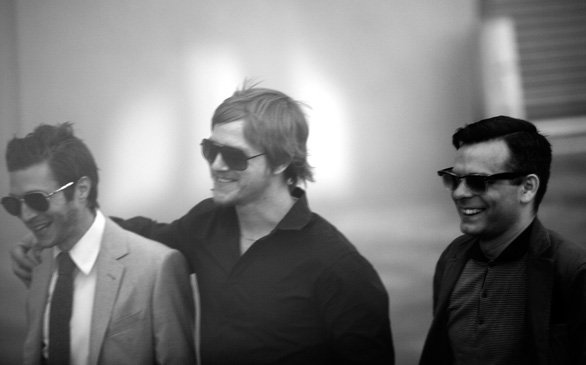 Interpol’s return to Los Angeles to a sold-out Greek Theatre was much anticipated for those who, like myself, missed their brief return this summer in conjunction with the release of their fourth, eponymous album.

What would Interpol be like without much-loved bassist Carlos D, who left the fold just after the album’s completion? Sadly, a major focal point of the live performance is sure to be missing. David Pajo (Slint, Ariel M) has stepped up to fill those shoes, technically quite well, although without quite the same charisma. Apparently it’s going to take some getting used to.

The group opens with a track off of the new album, “Success,” a dark almost dirge-y number that lumbers to life midway as if lifted on the excessive energy of the welcoming audience. “Say Hello to Angels” meets that energy and raises it tenfold. “C’mere” proves even more popular with the most rabid fans.

“Summerwell” already feels like an old favorite. “Rest my Chemistry” gets off to a somewhat shaky start; Daniel Kessler’s guitars sounding cluttered and razor thin. “Evil” is tight, earning a hearty response from the crowd and this time Kessler’s crunchy, disjointed guitars are spot-on.

“Take You on a Cruise” soars triumphantly on Paul Banks’ impassioned baritone wail, while new single “Barricade” has the audience singing along enthusiastically. “Lights” builds from a sparse guitar line to an emotion-wrought behemoth with all the force of an oncoming train.

“NARC” is where I start to take note of the visuals and it bears mention that whoever is behind the Greek’s projections gets it. The black and white, stark and often abstract live images have all the grace and elegance of a music video.

“Memory Serves” is gorgeous and “Slow Hands” kicks off aggressively; Kessler sliding and leaping about the stage like a deranged line dance. “Pda” has aged well; it’s far better now than on the recording. The band also survives the first burglary of the evening when a fan leaps up and attempts to make off with Banks’ jacket before his attempt is thwarted by security.

“Try It On” is swept along on a mesmerizing keyboard loop, and “Not Even Jail” rounds out the set magnificently with its thundering bass and alternating staccato and ringing guitar lines.

An encore of songs exclusively from their debut raises the energy another notch, which brings us to stage diver No. 2. Note: You’re doing it wrong if you steal the vocalist’s mic mid-line and get tackled to the ground by security. But the band luckily is unphased and misses nary a beat. “Obstacle 1” rounds out the night without further interruption, a stunning finale to a remarkable evening.