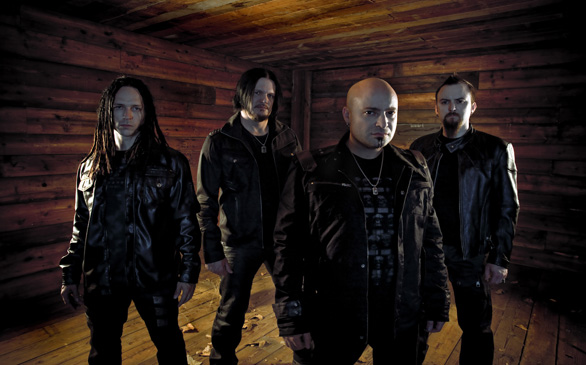 Hard rockers Disturbed have another hit record on their hands in the form of the recently-released Asylum album, but that doesn’t mean that they don’t have time to cook up some additional fun for their fans. The band has just premiered the Asylum Interactive Experience, an online game based on music from the new album. Players must try to escape the asylum in order to prevent a horrifying future from overtaking the world and in doing so they can win exclusive songs and unlock content like never-before-seen photos. Find the game at disturbedasylum.com.

This year’s Soul Train Awards Show, taking place in Atlanta Nov. 10, open with a performance from Grammy Award winner R. Kelly and feature a star-packed lineup including Ne-Yo, Cee-Lo, Keyshia Cole, Gyptian, Tamia, Eric Benet and Rick Ross. The show also honors R&B icon Anita Baker by presenting the singer with the Soul Train Legend Award. Baker, whose music has recently been sampled by Drake, has a new album of, as she puts it, “baby-making music” scheduled for release next year; 21st Century Love features guest appearances from Snoop Dogg and Tyrese.

No word yet on whether or not Baker will perform on show night, but other confirmed acts are Erykah Badu, Chrisette Michele, Lalah Hathaway, Faith Evans, Janelle Monae, Tank, Freddie Jackson and Jeffrey Osborne. Actors Terrence Howard and Taraji P. Henson host the show airing on both BET and Centric Nov. 28.

With the current worldwide interest in bass music, fueled by the phenomenon of dubstep and the Los Angeles “beat scene,” Daedelus and the Gaslamp Killer have found the perfect vehicle to showcase state-of-the-art electronic music for a rapidly growing audience – the Magical Properties Tour. Daedelus and GLK have been on a nationwide tour for a few weeks now, turning on fans in places like Toronto and Atlanta to the sounds of Los Angeles and enhancing the reputations of already notable bass music acts 12th Planet, Free the Robots, Samiyam and Teebs. The Magical Properties Tour ends with a hometown show at the House of Blues Sunset Strup Nov. 20 featuring all the previously mentioned acts, except 12th Planet.

Italian metal band Lacuna Coil and their label Century Media are running a contest where fans can win the band’s gear or other prizes. The Grand Prize winner gets about $4,000 worth of stuff: two guitars, a bass, microphone, amps, pedals, etc. and the entire Lacuna Coil catalog, including many rarities and special editions. The first runner-up gets an Ibanez bass and an ESP guitar plus the catalog, second runner-up gets the guitar and catalog and a third runner-up will get just the catalog. Contestants need to check out the rules at centurymedia.com/specials/lacunacoil and then tweet or post a Facebook update about the contest to be entered. Winners will be picked at random Dec. 10.

The Return of House Tour

No, we’re not talking about the cranky TV doctor. The Return of House Tour features world-renowned DJ and all-around party icon Roger Sanchez and Ibiza club staple Sidney Samson. Expect to hear bangers like “Sidney Samson-It’s All Funked Up!,” “Riverside,” “Give a Little More” and the brand new track from Sanchez featuring Far East Movement, “2Gether,” when the tour stops at the Music Box Nov. 13.

Dubber Side of the Moon

The Easy Star All-Stars had an interesting idea back in 2003 when they released Dub Side of the Moon, a reggae version of Pink Floyd’s Dark Side of the Moon. Now Dub Side has been reimagined in an even spacier bass-heavy place by a host of producers, including the Alchemist, Dreadzone, 10 Ft. Ganja Plant, Groove Corporation and Dubphonic. Dubber Side of the Moon also includes as bonus cuts alternate mixes of “On the Run,” “Time,” “Money” and a Border Crossing remix called “Step it Pon the Rastaman Scene.” The All-Stars have previously reggae-fied the Beatles and Radiohead with their Easy Star’s Lonely Hearts Dub Band and Radiodread albums and indicate that another as-yet-unnamed band will get a dub redo in early 2011.