Galaxy Too Much For Sounders FC 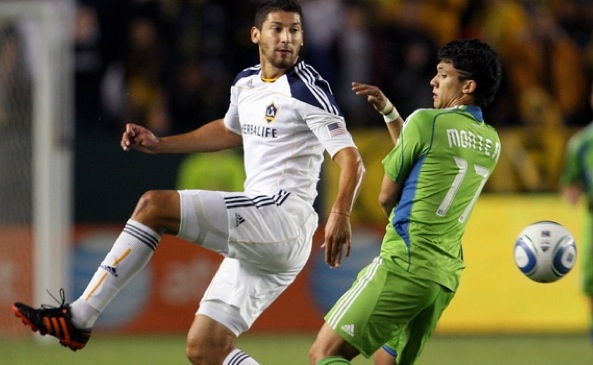 Goals by Edson Buddle and Omar Gonzalez within a 10-minute span lifted the Los Angeles Galaxy past the Seattle Sounders FC and into the Western Conference Championship at the Home Depot Center in Carson Nov. 7.

“In a game of this magnitude, this time of year, I’m pleased with it,” Galaxy head coach Bruce Arena states. “Whether it’s the best we’ve played, I don’t know. But it was certainly good enough.”

The sold-out stadium witnessed perfectly placed set pieces by midfielder David Beckham for eventual scores in the first half, giving the Galaxy a comfortable 2-0 lead by halftime.

Beckham’s first assist came in the 19th minute off a right-flank corner kick that found a mobile Buddle, who headed the ball into the back of the net. This marked Buddle’s second goal in as many games in the 2010 postseason.

Gonzalez put the Galaxy up by two eight minutes later when a curled free kick by Beckham landed on the head of a diving Gonzalez, who marvelously thundered the score past Seattle’s goalkeeper Kasey Keller.

Arena states that Beckham’s set pieces were terrific. He adds, “That was the difference in the game.”

Captain Landon Donovan went on to compliment Beckham’s play by calling him the most talented player on the team, and that showed after the English stud registered both assists.

For the match, MLS Goalkeeper of the Year Donovan Ricketts made three saves and gave everyone a scare after suffering a bruised right knee after a collision with a Seattle forward.

“I never leave games unless something is broken, so no chance. It was painful initially, but as the game went on, it got a little bit better,” Ricketts says as he laughs of potentially being subbed out.

Los Angeles now faces FC Dallas on Sunday, Nov. 14, at 6 p.m. for a chance to advance to the MLS Cup for the second consecutive season.