Back On the Winning Track 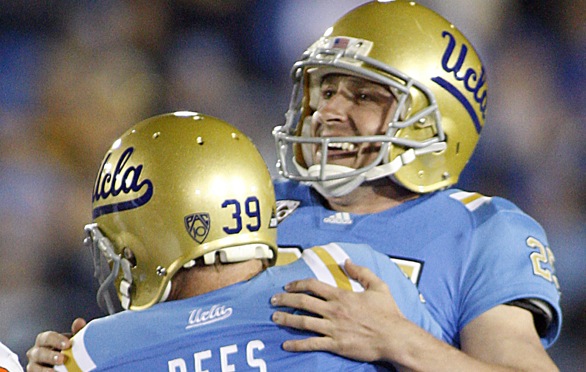 A rather low-scoring game and above par defensive playing lifted the UCLA Bruins football squad over the visiting Oregon State Beavers 17-14 at the Rose Bowl in Pasadena Nov. 6. Senior kicker Kai Forbath kicked the Westwood squad to a win with a 51-yard field goal with just one second remaining in the entire game.

“I have always wanted one of those,” Forbath says of the winning boot. “I wasn’t sure I was ever going to get one. That was the perfect opportunity.”

UCLA’s defense only allowed 267 total net yards, which includes preventing a 100-yard rusher to reach that mark. Also, UCLA had five more first downs than Oregon State did to go along with two lost fumbles.

Although he was sacked three times, quarterback Richard Brehaut managed to produce solidly when necessary. Brehaut gave the Bruins a one-touchdown edge after he rushed for the game’s initial score from seven yards out at 11:23 in the first quarter. The Beavers took nearly eight minutes to respond, but they eventually did with 3:11 on the clock. Ryan Katz’s pass to Joe Halahuni for the 28-yard gain resulted in a touchdown.

Thereafter, defense was a prominent part of the game, especially for the Bruins, since they only relinquished another TD in the third quarter (11:20) when running back Markus Wheaton rushed for 22 yards and an eventual score that gave the Beavers their only lead of the affair. UCLA responded at 1:45 as tailback Johnathan Franklin rushed up the middle of the field for a one-yard TD score, tying the game at 14.

For the game, Brehaut threw for 127 yards on 13-of-19 attempts, but he rushed for 61 yards and a score. Franklin carried the running load with 23 carries for 100 yards and a TD. With the win, the Bruins improve to 4-5 overall and 2-4 in Pac-10 play. They are just two wins shy of becoming bowl eligible.

“We are athletes, we’re competitors,” defensive lineman David Carter states. “We need to get that extra game. That’s what we do. We love to play football. We’re here to get to a bowl game. We’re not just here to go. We’re hungry.”

The Bruins also snapped a three-game losing streak. Meanwhile, the Beavers dropped to 4-4 and 3-2 in conference action.

After hosting two straight contests at home, the Bruins travel to Washington to face the Huskies in Seattle Thursday, Nov. 18, at 5 p.m.

USC managed to earn an important 34-33 win over the visiting Arizona State Sun Devils at the Coliseum Nov. 6 in conference action. Having lost to the top-ranked team in Oregon a week before, the Trojans came back to silence critics yet again. The Trojans improve to 6-3 overall and 3-3 in PAC-10 play, good enough for fifth place thus far; they have four games left in the season.

After being down 7-0 by the end of the first quarter, the Trojans took a 14-7 lead into halftime. The second half, however, resulted in a scoring show for both squads. USC led 29-21 by the end of three, but it was not until the fourth quarter that the Trojans sealed the victory after a failed two-point conversion landed USC’s way when Malcolm Smith returned it for the score.

Joe Houston kicked a game-winning field goal of 29 yards to lift the Trojans after being down 33-31 late in the last period.

Sophomore quarterback Matt Barkley posted 215 passing yards to go along with three touchdowns but also had two interceptions. Eight different Trojans had two receptions or more for the game, including fullback Stanley Havili’s three receptions for 43 yards and a TD. Running back Marc Tyler rushed for 119 yards on just 12 carries.

One of the setbacks for the Trojans this season has been their inability to be effective on the pass rush. v “That’s something we’ve not done a great job of this season, but this is a little bit of a normal team as far as staying in the pocket,” Kiffin says of the lack of pass rush.

USC now travels to Arizona for a critical showdown against the No. 18-ranked Wildcats on Saturday, Nov. 13, at 5 p.m.