I Knew It Was You: Rediscovering John Cazale and More 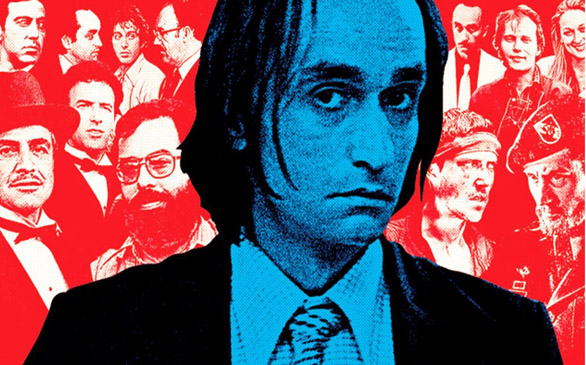 Stranger Than Fiction: Although he may not be a household name, John Cazale acted in a handful of the best movies ever made before dying an early death. I Knew It Was You: Rediscovering John Cazale gives Fredo his due. Friends and collaborators Al Pacino, Robert De Niro, Sidney Lumet and others pay tribute.

Ex-CIA agent Robert Baer, the inspiration for George Clooney’s character in Syriana, re-evaluates the car bomb as the century’s most deadly weapon in the riveting documentary Car Bomb.

Iconoclast, cult hero, art world phenomenon – Jean-Michel Basquiat was many things during his all-too-brief career. Starting as a Lower East Side graffiti artist, Basquiat was soon hobnobbing with the likes of Andy Warhol. The man, the myth and the legend are examined in Jean-Michel Basquiat: The Radiant Child featuring interviews with friends and colleagues.

The Majors: Michael Cera stars in the quirky adaptation of the beloved graphic novel Scott Pilgrim vs. The World. To win the heart of the girl he loves, Cera must do battle to the death with her seven exes. Edgar Wright (Shaun of the Dead) directs.

Adam Sandler assembles his old Bad Boys of “SNL” buds (Kevin James filling in for Chris Farley) for Grown Ups. A group of high school friends convene for the Fourth of July weekend and forget their responsibilities by getting in touch with their inner slackers.

Carrie and the girls find themselves fish out of water in the Middle East in Sex and the City 2.

The Idiotbox: Tim Roth returns as a psychologist who is an expert in reading body language to detect falsehoods in Lie to Me: The Complete Second Season. Based on a real-life professional, Roth is brought in to get to the truth of various cases.

Hank and Dean are back for more hilarious lampooning of ’60s-era Jonny Quest adventure shows in the Adult Swim series The Venture Bros: Season 4, Vol. 1.

The Great Detective is transposed to the modern day in the BBC’s Sherlock: Season One.

The new Matt Smith era of “Doctor Who” begins with The Complete Fifth Series.

Become a master of the grill while traveling the world with author Steven Raichlen in Primal Grill: Volume Three.

Michael Imperioli (“The Sopranos”) makes his directorial debut with The Hungry Ghosts.

The Two Escobars is the true story of two men with the same last name – one a drug kingpin, the other a soccer star – and the connection between them that leads to tragedy.

The Vault: Musical fans rejoice. TCM Greatest Classic Films releases two new collections, Astaire and Rogers and Busby Berkeley Musicals, featuring some of the best singing and dancing to be captured on film. Each collection features four films, including classics like Top Hat, Gold Diggers of 1937 and 42nd Street.

The Horror! The Horror! A new spin on a timeworn genre, the micro-budget British phenomenon Colin is a zombie flick from the undead’s point of view.

Michael Madsen gives another of his magnetic psycho performances in The Brazen Bull.

The dead rise from their graves in Damned By Dawn, a full tilt horror flick in the Sam Raimi mold.

Blu Notes: A watershed film in the post-apocalyptic genre and the film that made Mel Gibson an international star, Mad Max comes to hi-def. The action-packed revenge flick comes with both the original Australian audio track and the dubbed American version.

The Rat Pack plans the ultimate Vegas heist in the original Ocean’s 11. Frank, Deano, Sammy and Peter Lawford ooze cool in this 50th Anniversary Edition, which includes an excerpt of “The Tonight Show” featuring guest host Frank Sinatra as well as commentary by Angie Dickinson and Frank Sinatra Jr.