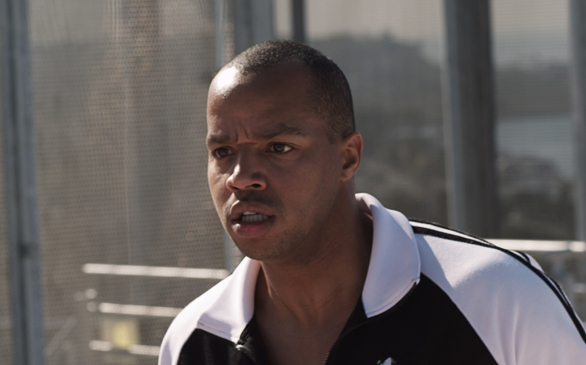 Donald Faison has a fascination for sci-fi flicks, so it’s no surprise the 36-year-old actor jumped at the opportunity to fight extraterrestrials in the independent thriller Skyline.

“Ever since I was a kid that was all I really wanted to do. I am a huge fan of Star Wars, Star Trek and Blade Runner,” says Faison, who is more known for his comic roles than his dramatic choices. “I thought when I first got into acting, that I would be doing stuff like The Goonies my whole life. I never thought that I would be considered funny and didn’t think I was going to be a comedic actor. I am the least funny of all my friends, so it’s really bizarre when people tell me how funny I am.”

A familiar face from the Emmy-nominated hit series “Scrubs” where he starred for nine seasons as Dr. Christopher Turk, Faison has been getting in great physical shape for the past couple of years in hopes of snagging an action role.

“I was doing ‘Scrubs’ for a long time, and when you are on a grind you get comfortable, so I got lazy and ballooned up to 220 pounds. I have since dropped most of it, and I would like to be 190 pounds ripped, specifically for action adventure,” adds the actor, who performed most of his stunts in Skyline. “Everything that you see me do in that movie I did. You will see me rolling around, grabbing things and jumping onto things. I did all of that, and I am glad I got in shape for the movie. A couple of years ago, I wouldn’t have been able to do it.”

Directed and produced by the visual effects duo Greg and Colin Strause, Skyline presented an opportunity for the Strause brothers, whose company Hydraulx has done visual effects for Avatar, 2012, Iron Man 2 and 300, to craft an in-house alien-abduction movie without any studio constraints. For Faison, fighting extraterrestrials that swallow the entire human population presented an opportunity to “jump into a fantasy world.”

“When I was a kid, I played with my toys and imagined I was in a galaxy far away fighting a bunch of monsters, and as an adult it’s a great way to tap into that inner child again,” Faison says.

Perfecting the part for Faison, who plays a special-effects wizard named Terry, meant hanging out with the directors, whom the character is loosely based on.

“This movie is about people who are not larger than life, trying to survive a catastrophe that’s larger than life. Greg and Colin are very tall and big men, kind of intimidating men,” admits Faison. “And by hanging out with them, I picked their brain, and it all developed into a friendship with these guys that wrote and directed the movie.”

Faison, who recently starred in the comedy Next Day Air opposite Mos Def and Mike Epps, hopes that with the success of Skyline, more sci-fi flicks will come his way.

“I would like to do more action adventure or sci-fi movies,” says the actor. “I would love to kick butt, get the girl, shoot a couple of bullets at somebody and at the end of the day save the earth.”