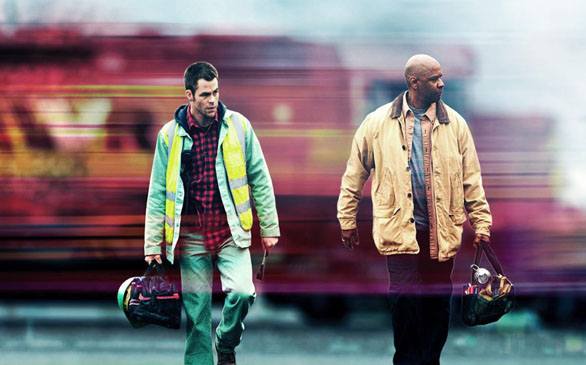 Imagine that you’re a blue-collar worker and today is your first day on the job. Your co-workers are anything but hospitable. The guy that they’ve partnered you with keeps busting your chops every time you make a mistake. Not only that, but your personal life is falling apart and you can’t fix it because you’re on the job. Then, just when you think it can’t get any worse ... [Cue: “Runaway Train” by Soul Asylum] some intellectually substandard bozo forgets to do the one thing he’s paid to do, which results in one of the most frightening potential disasters to unravel in United States history. Think this is simply the story line to another Hollywood popcorn movie? Well, think again. This story is the plot of the action-thriller Unstoppable, but it’s also based on a true story.

In real life, it was two Pennsylvania locomotive workers named Terry and Jesse who found themselves embroiled in a show of heroics to save neighboring towns from a series of runaway cars barreling down the tracks. Although highly experienced within their field, this type of activity on the job is something that happens once in a lifetime. In Hollywood, however, Unstoppable marks the second train-related collaboration between director Tony Scott and Denzel Washington. But Washington had no qualms about stepping into the subject matter this time around.?

“I trust Tony, who’s a great filmmaker, and I enjoy working with him,” says Washington. “We have a good shorthand now; I know what he’s after and he knows how I like to work, and we leave each other alone to do the work. Tony’s very enthusiastic, and his team loves working for him; so with him, it’s easy.”

Washington felt very comfortable making suggestions about the rest of the cast. Rosario Dawson (with whom he acted in He Got Game) brings an emotional electricity to the screen as Connie Hooper, the train yard master. Scott was also encouraged by his leading man to cast Pine after seeing his breakthrough performances in Star Trek as well as the play “Farragut North.”

Washington’s talent easily resonates with his co-star as well.?

“Denzel pushes and pushes you to do a better job,” explains Pine. “He’s complicated in all the best ways, and he brings so much to the table that each take is different, each has a distinctive quality. If you’re present and paying attention, you can play off those nuances, which gives the characters more depth. Denzel’s the best at what he does, so I took my cues from him.”

Yet, even with all the admiration on set, everyone agrees that the train is the major attraction.

“The 777 is the real star of the movie,” says Washington. “It’s the shark in Jaws. It’s the monster in the room that’s going to destroy people, towns – anything and everything in its path. Chris Pine and I are just side men. It’s all about the train. That’s why it’s called Unstoppable.”

Interacting with the unsanctioned fourth star of the film required Pine and Washington to be in tip-top shape. Both performed a number of their own stunts. They were also fortunate enough to have the best of the best step in when needed.?

“We had very experienced stuntmen,” says Washington. “We had some of the same people from Casino Royale.”

Moviegoers will marvel at the pulse-pounding action sequences that quite literally take one’s breath away. Moment to moment, there are many twists and turns (figurative and literal) that will catch the viewer off guard.

In one of Unstoppable’s most harrowing scenes, Pine is wedged between two train cars while trying to set the brakes on both. As speed picks up, snow flurries erupt and much of the grain that is being carried by the locomotive begins to spill out, causing a difficult rescue. What audiences don’t know is the Hollywood trickery that goes into making snowflakes and wheat pound a guy in the face at high speed. But here’s a hint: Thank the good people at General Mills.

“Who knew that cereal could be such a pain in the ass?” jokes Pine.