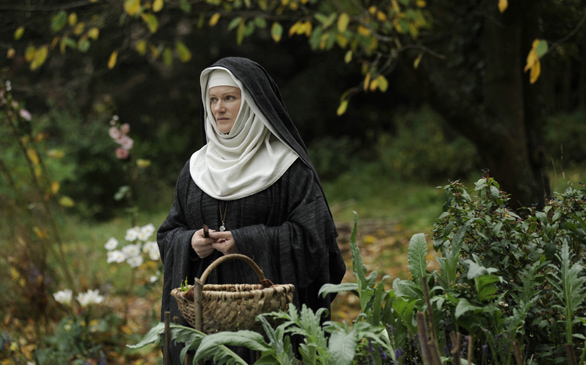 Set in a 12th-century Benedictine monastery in Germany, Vision tells the story of nun Hildegard von Bingen (Barbara Sukowa), who claimed to receive visions from God and challenged the men of the church with her learning and concern for the women of the cloister. To get bigger roles for her sisters and to protect them from the men in the monastery, Hildegard (as the film portrays her) was selfish in some ways and was concerned for her reputation in the church. The film follows Hildegard throughout her life, as she struggles to publish her visions and handle an over-adoring young nun.

Sukowa gives a very passionate performance as the main character, arguing vividly with her detractors, throwing herself on the ground to beg for mercy from her male colleagues and gazing off into the unseen. The woman that she portrays was of course a trailblazer for women’s rights by becoming educated in medicine and natural science (or what was considered science at the time), but it confused me that such a great woman would come off as so self-righteous. I think she had to have steely conviction in her visions and her actions concerning her sisters to get through to the extremely misogynistic men of the monastery, but I expected her to be more humble and likeable. It may speak to the fact that this is a not an American film (It was originally released in Germany.) that Hildegard need not be the traditional relatable heroine.

Another interesting element of the film is the level of drama that is able to occur in a cloister. Jealousy, sex, abortion, suicide – all these are present in the group of nuns that Hildegard leads after her adopted mother dies. I will give the film a positive note because it reminded me that people are people, regardless of their occupation. Tension and drama can be found even in the most seemingly stark of places.