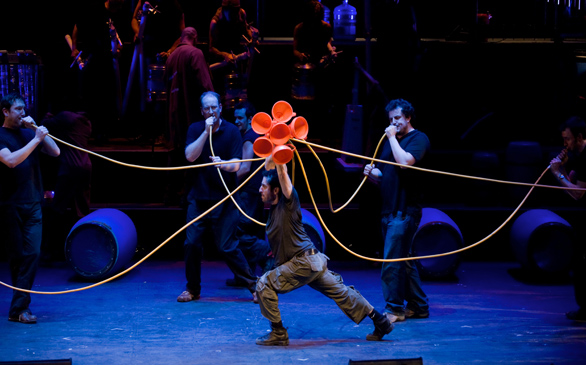 How are the creators of the world-renowned “Stomp” going to top their first sensation? Why, by making it bigger and better, of course.

Creators Luke Cresswell and Steve McNicholas have teamed up yet again for another taste of excitement that they plan to tour around the world. Their next stop: UCLA’s Royce Hall for four performances.

In the duo’s latest creation, “Pandemonium,” a cast of 26 percussionists, plus UCLA’s choir, puts the number of performers on stage at over 50. Everyday objects like glasses, bottles, traffic cones, rope and filing cabinets are transformed into original, newly invented instruments. With those objects and the help of trained performers chaos ensues.

According to Cresswell, 12 of the 26 performers are “Stomp” veterans, while 12 are also trained percussionists, and the other two are more performance-oriented than musically trained.

“The cast is an amazing group of people. It’s quite a mixture,” he says.

Despite “Stomp”’s success, Cresswell and McNicholas weren’t initially positive they could pull off “Pandemonium.”

“It’s an idea we’d had for a long time, and it’s always been a dream to put this on stage. It’s a big show and a big idea,” says Cresswell.

“Its one of those things that you think about it and then you think, ‘No, that’s too silly an idea. It’s too complicated,’” he says. “Then we were approached by the Brighton Festival asking us if we had a dream, what would we do if we could do anything? And we said that’s something we’d love to try to put together.”

That’s precisely what they did. The show debuted at the UK Brighton Festival in 2006. Since, “Pandemonium” has traveled to the Sydney Opera House, London’s Royal Festival Hall and the Carre Theatre in Amsterdam.

“Each time has just been fantastic,” boasts Cresswell. “It’s such a great show.”

In the major cities, “Pandemonium” typically teams up with local choirs.

“On stage it’s great. It gives you a new perspective on the show and you meet different people,” says Cresswell.

Albeit rewarding, the experience of collaboration presents some obvious challenges.

“They’re very nervous, and they don’t know what this show is. It’s a rare show. It’s a dramatic show,” he says.

“And we’re nervous because we’ve never heard them sing before. So there’s a trust that goes both ways. We won’t meet the choir until the day before the first show. So they’ve got to keep their fingers crossed that we will get on, and we’re the same way,” explains Cresswell.

“It’s usually a great energy, and it’s all exciting,” he shares.

While Cresswell enjoys collaborating with new people, he’s remained loyal to co-creator McNicholas for a fair share of their work. The two are currently working on two natural history films: one underwater film and the other about great white sharks.

“We’ve worked together so long now,” tells Cresswell. “But in a way we sort of work solo. We don’t necessarily sit in a room and write together. I write on my own and then Steve will write, and then we collaborate and then we sit and see each other’s work and start again.”

“It’s a very good relationship to work in,” he says. “I’ve never felt the need to do lots of solo projects. But we get along great and we have lots still to do.”

So how similar is “Stomp” to “Pandemonium?”

“If you buy an album from a musician and you go to get the next album, you hope you’d like that because it’s the same musician,” he says. “It’s the same with this. But the reaction so far has been fantastic.”