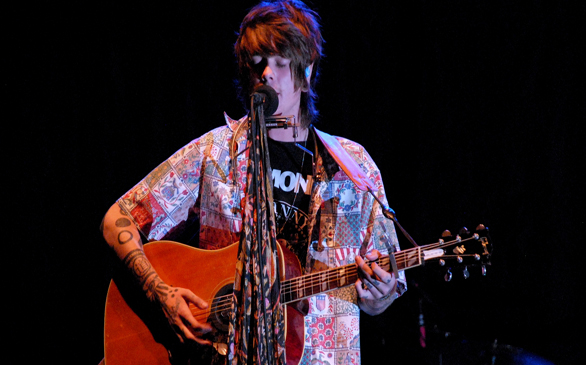 Countless teenagers circled the Wilshire block outside the Wiltern while eagerly waiting to enter. Once inside, a stampede erupted as everyone rushed the stage for the closest spot. As the stage lights went dark, everyone in attendance released a high-pitched and extremely piercing scream. Never Shout Never had arrived.

Lead singer Christofer Drew Ingle, better known by his moniker Never Shout Never, kicked off the night with an acoustic guitar and a harmonica. Every soul in attendance sang along with his soft blues and mellow harmonic sound. Suddenly the other band members joined him on stage as confetti fell from the ceiling. Ingle made excellent use of the stage as he traveled from coast to coast to jam out with his fellow band mates. His high-pitched voice filled the venue with joy while the girls screamed “I LOVE NSN.”

Ingle proudly revealed his Ramones shirt halfway through the setlist, shining light to his multiple tattoos across his arms and knuckles. Never Shout Never is far from your average teen band obsession. It may seem they share similar sounds to the Jonas Brothers or Miley Cyrus, but they are nothing alike. NSN’s music stretches back to the flower generation as they sing about peace and love. They credit the Beatles as a primary inspiration for their music. Combined with keyboards, bass, guitars, congas and drums, they create a sound unlike any other for their age group.

Never Shout Never played a 90-minute set list for the young crowd. As the parents prepared to head for the doors, Never Shout Never returned with two encores that drove the crowd insane. Ingle encouraged fans to love and believe in themselves, follow their dreams and simply, be happy. The audience walked away hyper and eager for more as the band signed off. Don’t expect these guys to go away anytime soon; they are just getting started.