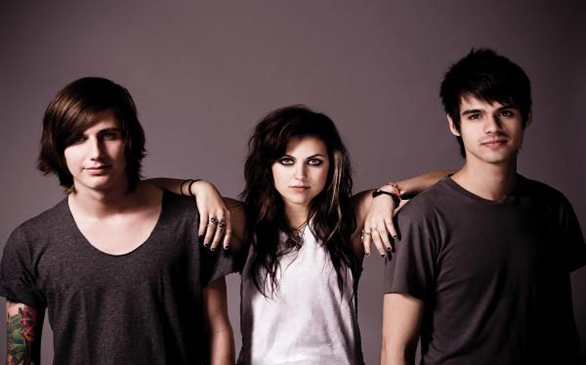 Given the overgrowth of completely terrible bands that have sprung up of late on the pop-punk and melodic rock fronts, both boy and girl-fronted, it’s always a pleasant surprise when a couple good ones manage to find their way to each other on a tour. Taking stage first, the Phoenix natives of Anarbor made for a largely entertaining set that, despite how young they are, proved accessible to an audience that spanned across the age spectrum. While so many bands pander to the youngest possible demographic, the foursome played songs that were infectiously catchy, but still maturely written in both instrumentation and lyricism.

Taking stage next, headliners VersaEmerge took full command of their audience from the first arena-worthy notes of their set. Playing the majority of the tracks from their latest album, Fixed at Zero, the threesome seems to have also matured into a full-fledged adult rock band. Frontwoman Sierra Kusterbeck’s signature powerhouse vocals were on point for the entirety of the band’s set, showing both a technical ability and natural charisma that puts the other songstresses of her genre to shame. Yes, even that other one from that other band all over the radio right now. If the Florida-bred trio’s growth over the last year is any indication, however, Versa is poised to usurp that throne very soon as well.