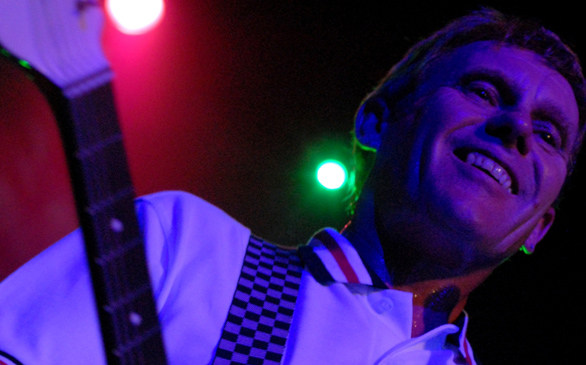 Eighties KROQ disc jockey Richard Blade hosted a Halloween party at the Music Box headlined by the English Beat. The audience showed immense dedication as they conquered the Hollywood traffic on Halloween night to see the ’80s band perform. As Blade introduced the band, the crowd burst with excitement and the dancing began.

Dave Wakeling took the stage with a huge smile as he embraced the audience. Composed of an older crowd, the music included a thick nostalgia in the air. During the setlist, everyone traveled back to the ’80s with their dancing shoes. Each song was an instant sing along while bodies bounced to the beat. Dave delivered hit after hit accompanied with his left-handed guitar and five other members in the band.

Midway through the show, the Beat introduced a costume contest with host Blade. Categories included sexiest costume, scariest and most creative. Dave could be seen off stage enjoying everyone in attendance. The crowd had the final say as they judged by the loudest screams. Once the band returned from intermission, Dave complimented the participants for their creative attire. As the ghouls of the night walked off stage, the band continued their reggae and ska movement.

Every song seemed like a fan favorite. The setlist included “Save It For Later,” “Mirror In The Bathroom,” “Twist And Crawl” and “Doors Of Your Heart.” Dave played amongst very talented members as Rhythmm Epkins sat behind the drum kit and Wayne Lothian contributed with his bass. Antonee First Class was on toasters and tambourines and Raynier Jacildo on the keyboards. Matt Morrish rounded out the band with his saxophone and amazing solos between songs.

The show finished with a near two-hour performance and a dancing, packed crowd begging for more. Dave expressed complete gratitude and appreciation and thanked everyone for a wonderful night before walking off.