Pepper: Stitch Up Your Problems on Like a Surgeon Tour 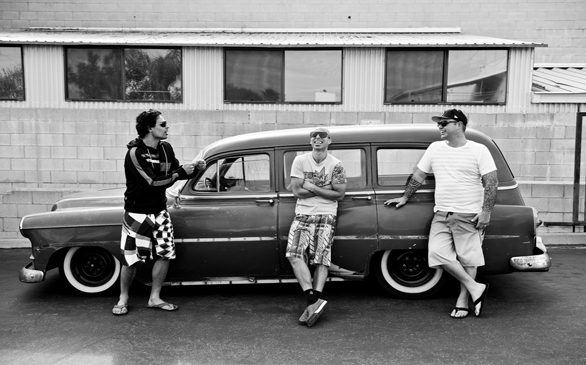 The fun, easygoing guys of Pepper are on the last leg of their Like a Surgeon Tour to promote their new EP, Stitches, which was released last month. The Hawaii-based trio – guitarist/vocalist Kaleo Wassman, bassist/vocalist Bret Bollinger and drummer Yesod Williams – are excited to be on the tour, with Wassman describing it as “Pepper’s latest effort to heal shitty music … basically trying to heal is what we’re doing.”

Their effort is well received, as their five new songs are all on par with their past work (amazing!). The title of Stitches came about because they felt the need to be “stitching all these problems. Like laziness – we need to cure laziness.”

While laziness may or may not be cured as a result of this tour, your craving for new Pepper material will be.

When asked about the tour, Bollinger describes it as a college party: “We’re college guys.”

“Drunk Girl” is the title of one of the tracks on the EP, which is an ode to that infamous girl we know at parties who gets a little too drunk much to the dismay of said girl’s girlfriends. The lyrics describe the situation perfectly: “And your girls can’t believe that I could be that mistake, but oh! The only reason you’re here with me is cuz I love a drunk girl.”

The dance tune brings fans back to popular hits like “Give It Up,” pumping their fists for Pepper’s new music.

The band encourages fans to dress up for the show. Bring scrubs, nurse outfits, whatever medical attire you have to help put you in the mood for Stitches. They go all out with this tour, dressed in scrubs for the whole performance (until Wassman claims it’s too hot, and decides to take his shirt off … No complaints here.). The backdrop is highly decorated, complete with a hospital setting and props, including a teaching skeleton, wheelchairs and two nurse cutout boards. One thing is for sure, these surgeons “treat” their fans well, giving them a high-energy musical performance that spans their more than a decade on the scene. Every night, Wassman says they “will be testing the health of the crowd by volume,” so be sure to show up for your checkup in good spirits; the doctor will be able to tell if you’re not following his orders faithfully.

With all of the novelty involved, the only problem with Pepper’s Like a Surgeon Tour design is that it brings back too many memories of blink 182’s Enema of the State album cover. That being said, the atmosphere created by these props only adds immensely to the party-like atmosphere.

Pepper crowds are always good ones, especially when Wassman lets his vocals carry through the mic into your body causing you to burst with movement. Their unique sound is described as a blend between rock “shock and ah” and island reggae. (If you can’t make it out to the show live – which is a shame – fans can Ustream the whole tour or head to their Web site, pepperlive.com, for blog updates.)

Also, be sure to listen to the lyrics of their classic songs for an added twist. They switch around the words in some songs to match the hospital-themed tour.

Wassman describes it as “spicing up the relationship” a bit, kind of like “when you’re dating someone for a long time, it’s the same thing over and over again, but you gotta throw in a few extras to keep it going.”

But having fun, themed tours isn’t just what brought Pepper the success they have today. They started up their own record label, LAW Records, in 2007 (law-records.com), which now carries other artists like Splinta, Iration, Passafire and the Supervillains. It is their mission to make sure good music doesn’t go unheard. I’d say they’re doing a pretty good job so far.

So, what’s next for the future of Pepper?

“We have new songs slated for next summer – but it’s more like an aim, like a promise ring. A ring pop,” says Wassman, with Bollinger adding, “Next summer, we’re looking at you … but … don’t look at us.”

Club Nokia will explode on Nov. 13 when Pepper hits the stage with Pour Habit, Fishbone and Chali 2na. It’ll be one concert you’ll want to be sure to experience.

As a final note, Wassman adds, “I’m a physician … if weed were legalized, I hear people would be cured of cancer.”