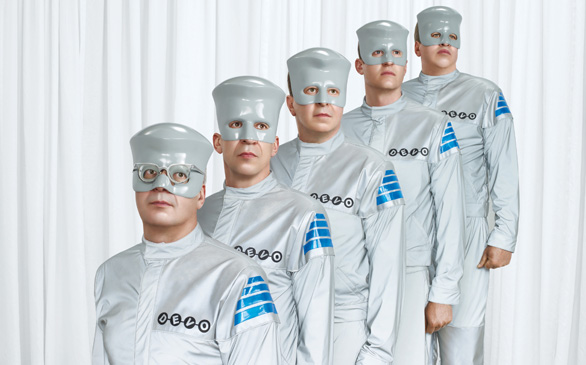 As part of its new exhibition, The Artist’s Museum (a showcase of work by more than 140 artists who have helped shape the artistic dialogue in Los Angeles over the past 30 years), the Museum of Contemporary Art Los Angeles (MOCA) honors Devo with an installation devoted to the New Wave pioneers. The exhibit consists of a wall of approximately 400 of Devo’s iconic red “energy domes” as well as photos and video footage of the band. Students with ID get into MOCA for the discounted price of $5.

Devo was scheduled to appear at Club Nokia Nov. 12, but that show and the rest of their tour got postponed until 2011 after guitarist Bob Mothersbaugh sliced his right thumb to the bone on a glass shard, severing a tendon. Mothersbaugh is expected to make a full recovery.

You may know Richie Hawtin, aka Plastikman, by any number of names. The celebrated DJ also answers to Cybersonik, Jack Master, Fuse, Circuit Breaker and Robotman, to name a few. Fans can now pre-order various versions of the collected works of Plastikman, 17 years’ worth, for delivery early next year.

The Reference version of Arkives contains a DVD, a book and 11 CDs, including a disc of currently hard-to-find remixes done for Depeche Mode, New Order, Hardfloor, La Funk Mob and others. Another of Reference’s CDs features all new remixes of Plastikman material by Moby, Francois Kevorkian, Chris & Cosey, Vince Clarke and Mute’s Daniel Miller & Gareth Jones. The Analog version of Arkives is six records pressed on 180-gram vinyl, the Digital edition is, of course, a digital download of the material and Collection, for really big fans of Plastikman, contains all of the above.

Hawtin’s Minus Records is only going to make as many copies of the physical versions as are pre-ordered at plastikman.com/arkives by Dec. 31, and those who order before Nov. 14 get an additional Plastikman mix CD and a Christmas card from the man himself.

In a clever play on Black Friday, the kickoff of the holiday shopping season that falls on the day after Thanksgiving, select record labels and independent record stores are launching the Back to Black promotion for a flight of vinyl-only releases. Indie record stores are the exclusive outlets for the titles, scheduled to include a collection of previously unavailable live cuts from U2, a reissue of George Harrison’s All Things Must Pass and the Jimi Hendrix Christmas EP, Merry Christmas & a Happy New Year.

Metallica, Bob Dylan, Tom Petty and the Heartbreakers, Slayer, Cee-Lo, Drive-By Truckers, Anthrax, Bruce Springsteen and Iron & Wine are among the many other acts participating. All Back to Black titles are available beginning Nov. 26, and most are limited editions, so get them while you can.

Go Ahead, Make My Day…

Just like his dad, movie star Clint Eastwood, Kyle Eastwood is a talented jazz musician. Kyle remembers hearing his pop’s Miles Davis and Duke Ellington records as a kid, and those childhood influences, after years of paying dues on the L.A. and New York club scenes, gel nicely on his recent release, Metropolitain.

A bass player, Eastwood credits his father with introducing him to the bottom-end, including having taught him how to play the bass line of the jazz standard “Boogie Woogie.” In return, Eastwood has contributed music to the soundtracks of a half dozen of his dad’s films, including Gran Torino and last year’s Invictus. Eastwood and his band appear at Jazz Bakery at the Musician’s Institute Nov. 20.

The Music in Media Interactive Symposium (MIMISYM), an event designed to increase a musician’s income by connecting them with directors, music supervisors, attorneys and new technology will be held at the Highlands Hollywood on Saturday, Nov. 20. Participants will be able to learn how to do things like obtain high-paying writing gigs, sell music content and connect music with brands for cash from a panel of industry professionals including director Penelope Spheeris (The Decline of Western Civilization), music supervisor Nora Felder (“Californication”) and composer Jim Dooley (Gladiator).

The panel of experts will also be available for one-on-one mentoring sessions. For details go to hmmawards.com and click on “conference.”