Men's Basketball: USC and UCLA go back to the drawing board. 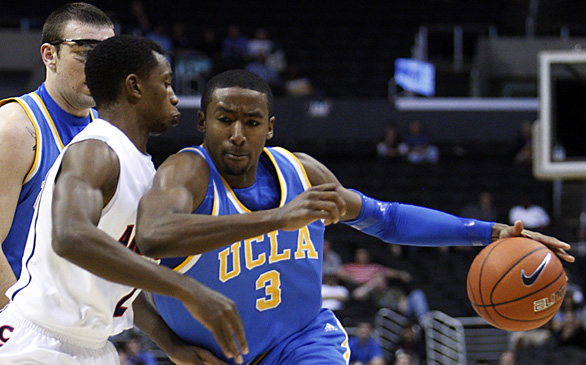 The UCLA Bruins hope to rise to the top of the Pac-10 with players like Malcolm Lee.
(Credit: Luis Sinco/Los Angeles Times/MCT)

The UCLA Bruins are hungry to get back to work and redeem their good name as men’s basketball champion contenders. With hopes of getting on top of the Pac-10 this season, the Bruins added lots of young talent to the roster. Looking to add versatility, UCLA managed to pick up Top 10 talent recruit Joshua Smith, Tyler Lamb, Alex Schrempf, Lazeric Jones and the Wear brothers – Travis and David.

Smith has been projected as UCLA’s best prospect since the recruitment of Kevin Love in 2006. Smith is a powerful 6-foot-10 center from Kentwood High School who can defend the rim and consistently get rebounds and second-chance points. Smith averaged 26.8 points and 13.5 rebounds per game in 2008, which was a school record. He was rated the No. 1 center and No. 10 overall recruit in the country by ESPN.

Smith joins elite all-star Lamb from Mater Dei High School who also decided to continue his basketball career with the Bruins. Lamb is a 6-foot-4 guard from Santa Ana, Calif., who averaged 14 points, 4.6 rebounds, 3.5 assists, 3.3 steals and 1.1 blocks per game. Lamb’s defensive tenacity and three-point accuracy are good contributions to the Bruin team, and he is seen as a real outside threat.

Schrempf is a 6-foot-5, 227-pound forward who was seen as an all-star at Bellevue High School in Bellevue, Wash. In 2009, Schrempf averaged 15.3 points, 7.5 rebounds and 1.2 assists per game. During his senior year he had five double-doubles. He has won two MVP titles and one co-MVP title at an all-star game in Bellevue and at the Martin Luther King Holiday Hoop Fest. His leadership and dedication are great assets to the Bruin team.

Jones is a 6-foot, 187-pound guard from Simeon High School in Chicago, Ill. Jones is a junior this season after transferring from John A. Logan College. As a transfer, he brings some college experience as he joins his young rookie teammates. Jones averaged 14.5 points and 4.9 rebounds and led his team in assists (5.7 per game), steals (3.5 per game) and free-throw percentage (77 percent) as a sophomore in the 2009-10 season.

Another great addition that the Bruins made is that they went out and recruited the Wear brothers. David and Travis were both McDonald All-Americans (for Mater Dei High School) and are coming in as transfers as well. The twin brothers are coming from North Carolina to join the UCLA roster. The 6-foot-10 brothers add lots of size to the team. Travis averaged 3.5 points and 2.2 rebounds, while David averaged 2.9 points and 1.7 rebounds.

The Bruins’ young team has lots of potential if the chemistry is right once they start the season. But UCLA still has some veterans returning to the team such as 6-foot-4 guard Malcolm Lee who averaged 12 points, four rebounds, three assists and one steal.

The Bruins took a light blow as they lost 6-foot-5 guard Michael Roll to the NBA draft. Roll was a top NCAA player drafted by the Toronto Raptors. As he joins the many alumni that play in the NBA, the Bruins have enough talent to replace the hole that Roll left in their starting lineup.

UCLA head coach Ben Howland seems confident in the recruited class that UCLA put together, but he has his work cut out for him and his staff as they take on these young stars. The Bruins will be able to see how this young talent comes together and what they are able to produce as they open up their 2010-11 season against Cal State Northridge Nov. 12 at Pauley Pavilion.

Also, they hopefully will work to improve from last year’s 14-18 overall record, and get ready to face their cross-town rival USC who swept them during the regular season last year.

Across town the USC Trojans are looking to regroup after implementing sanctions last season that prevent them from continuing into the postseason. According to ESPN, the team self-sanctioned themselves last season due to an internal investigation that found out NCAA violations had occurred leading back to O.J. Mayo, who was on the USC roster for the 2007-2008 season.

The self-imposed sanctions ban USC from playing in the postseason, cause a reduction in scholarships and the vacating of all wins from the 2007-2008 season.

USC’s overall record was 16-14 last season with a road record of 2-9. Hoping to improve from that the Trojans looked to add size, versatility and leadership to their team. USC has added freshman Garrett Jackson, Bryce Jones, Curtis Washington and Maurice Jones.

Jackson is a 6-foot-6, 215-pound forward who averaged 18.6 points, 8.8 rebounds, 2.3 assists and 1.7 steals. In high school, out of 29 games Jackson had double-doubles in 13 of them, in 20 of those games he had at least 8 rebounds and in 14 of those he averaged at least 20 points. Jackson attended Westview High School where he proved he could play different positions on offense or defense. Bryce Jones comes from Taft High School and is a 6-foot-5, 200-pound guard that averaged 16.9 points, 7.5 rebounds, 1.9 assists and 1.6 steals. One of Jones’ most recognizable stats is that during his senior season he had five double-doubles and six double-figure rebound games. Both of these young players’ dedication to producing on both sides of the ball will serve as a big contribution to the USC team.

Washington is a 6-foot-10, 230-pound forward from Elizabethtown High School in Kentucky. He averaged 8 points and 4 rebounds as a junior. Although he missed several games during his senior year due to an injured ankle, Washington proved to be a good shot blocker and rebounder. Those two aspects of his defensive game will add to USC front line.

Lastly, USC recruited Maurice Jones from Arthur Hill High School. Jones is a 5-foot-7, 155-pound guard that averaged 30 points, 12 assists, five rebounds and four steals. His explosive offense will be sure to excite fans and spectators at games. Jones’ speed will allow him to stretch the court and create plays for the rest of his teammates. He is known for his long-range jumper, but one of his most important stats was that in his four years at Arthur Hill he scored more than 1,800 points, had 705 assists, more than 300 rebounds and 200 steals.

Although young, it’s these types of versatile players whom USC needs to take their team to the next level and into the postseason in the future. As these rookies make their transition into a more developed system of basketball, these players are key to the Trojans’ success. The consistency in their game will allow USC to go far in the Pac-10 conference eventually.

Even though players like DeMar DeRozan headed to the NBA in 2009 (chosen by the Toronto Raptors, ninth overall) and Marcus Johnson and Dwight Lewis headed overseas to play, USC has yet to forget its veteran rising stars still on the roster. Senior Donte Smith, 5-foot-11, 180-pound guard, will be given one of the starting guard positions this year. Being part of the secondary last season he is seen now as a more experienced player who will serve as a spark to ignite the Trojan offense. Working on his shot from three-point range, Smith will be looked upon as one of the team’s outside threats.

With Smith taking the outside shots, he still can lean on his teammate Nikola Vucevic. Vucevic is a 6-foot-10, 240-pound junior forward deemed as the team’s multi-talented big man. He has a unique style of play that allows him to score inside and outside, as well as defend on both sides of the ball.

As the USC Trojans continue to push forward for a good season and construct a Pac-10-contending team, they open up their season against UC Irvine on Nov. 13 at the Galen Center.

USC and UCLA will have to really get their freshmen recruits ready for the college-style basketball they’re about to encounter. They will be going up against teams like Cal and Arizona State, who ranked in the Top 5 of the Pac-10 Conference rankings last season. Also, although Oregon and Stanford ranked in the bottom of the standings, they still look to be a threat this season. Both of those teams will be looking to upset any team within the conference. Washington State finished last in the conference last year, but don’t count them out so far as their offense has produced an impressive 41 percent accuracy from 3-point range.

All the teams in the Pac-10 are looking for championships and to make a mark this 2010-2011 Basketball Season. Cal is looking to stay on top while USC and UCLA go on to challenge them to regain their respective standings. One thing is for sure, with the impressive 2010 recruitment class this season, the No. 1 spot seems to be up in the air, and it all comes down to who wants it more.