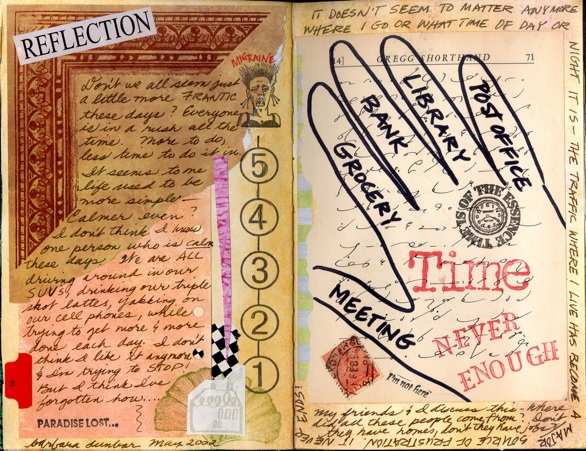 On a quiet Tuesday afternoon, I drove down to the Skirball Cultural Center to take a look at The 1000 Journals Project on display now through February. Sitting by myself, I was able to be immersed in the art and memories set out on tables to be flipped through.

Artist Brian Singer started The 1000 Journals Project in August 2000. He sent blank journals to various public places, and they ended up in airports, schools, museums, parks and wherever else you can think of. Inside was a note encouraging the person who found it to make an entry (with no parameters) and then to pass it along. What has resulted is a collection of art, personal confessions, political statements and well wishes for the next person who opens the journal.

Of the thousand journals that have travelled the world, no less than 30 have made their way back to Singer, and a dozen are on display at the Skirball. Reading through the pages in the journals, I am reminded of another project: the PostSecret postcard project, created by Frank Warren. In this project, individuals create a homemade postcard anonymously confessing a secret and mail it to Warren. He posts some of these cards on his blog or compiles them in his books and museum exhibits. There is a level of honesty in these postcards that only anonymity could bring. I would argue that as human beings we need some sort of outlet for the kind of confessions that aren’t polite (or in some cases, legal) to share with friends or family. That’s why therapists exist. And it’s also why Warren got so many responses to his project.

It’s also why The 1000 Journals Project is so fascinating: Every type of person in the world has something they need to share, something that can only be said in a safe, anonymous environment. The interesting thing about this project, which differentiates itself from the PostSecret project, is that some entries are signed by the contributor. Some even have contact information. I came across a few pages written on by a British woman who included her name, e-mail and a photo of herself.

The sentiments of the entries start showing a pattern of outreach: Many people share their troubles so that the next person who picks up the journal may be helped or encouraged by their words or art. The whole so-called “experiment” really accomplishes what it set out to do, which is to foster a community in the tradition of the shared human experience.

Also, since the project was started in 2000, there is a decade’s worth of journal entries spread throughout the journals already returned to Singer. Each page is like a time capsule, inciting nostalgia in the reader but also giving a sense of history on each page. Huge events have transpired in the ’00s, including 9/11, the 2004 and 2008 U.S. elections – and those are just the events that occurred in America. Each entry also reminds the reader where she or he was at in their life at the time of the writing of the entry. I found entries from 2003 written by girls of a similar age that just reminded me how much I have changed since that year.

The most exciting part of the project, however, is the possibility of contribution by Skirball visitors. Set up in one half of the room are tables with new journals whose cover art the Skirball commissioned from various artists. This is the 1001 Journals Project, extending the original project by starting the journals’ lives at the Skirball and then dispersing them across the globe. Each visitor helps create the exhibit by making an entry with provided markers, scissors, pencils, glue, feathers, art books, etc. I left the exhibit with a full heart, receiving the contributions of a decade’s worth of human honesty and having left my own small mark on the new project.