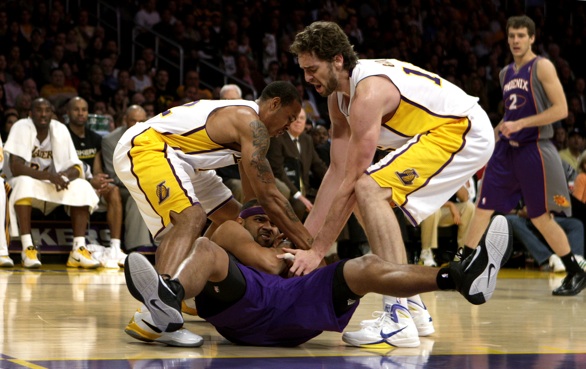 The Lakers are no longer undefeated.

Los Angeles suffered back-to-back defeats on the road against the Denver Nuggets (Nov. 11) and most recently at home versus the Phoenix Suns (Nov. 14).

What happened? For starters, the Lakers (8-2) played quality teams in Denver and Phoenix; both the Nuggets and Phoenix hold the experience and talent to beat any team on any given night in the NBA. Second, the Lakers allowed both squads to score over 100 points, so defense was an important factor because they lacked it. Against the Nuggets, the Lakers held the lead for most of the game, including going into the fourth quarter. However, the host team managed to produce a rally with bench players en route to outlasting the purple and gold.

As they entertained the Suns, a similar thing occurred but the difference was in the amount of three-pointers made. Phoenix made 22 of them, while Los Angeles only nine. The Lakers’ inability to defend shooting guard Jason Richardson hurt them as well since he erupted for 35 points and eight rebounds.

Moreover, Pau Gasol’s double-double of 28 points and 17 rebounds practically became nonexistent because the team experienced yet another defeat. Gasol has been the Lakers’ most efficient and consistent player through 10 games thus far in this campaign.

The only remaining undefeated team in the league is New Orleans at 8-0. Head coach Phil Jackson never really cared about breaking the all-time record for wins by a team in a season. In fact, he even hinted at not wanting it.

Yes, the Lakers can no longer call themselves undefeated. And yes, the record that the Chicago Bulls hold probably will not be broken. However, L.A. truly does not mind because their true competition does not begin until June of next year.