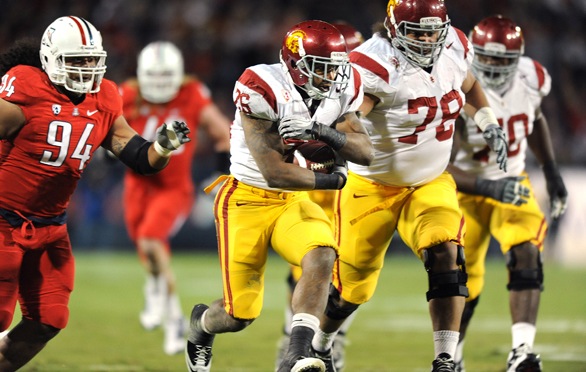 After a 24-21 victory over the then 18th-ranked Wildcats in Arizona Nov. 13, the USC Trojans move into the AP Top 25 poll as the No. 20-ranked team in the nation. With their second consecutive victory, the Trojans are now 7-3 overall while carrying a 4-3 record in the Pac-10 Conference.

“Our offensive line has taken a lot of criticism, especially from me, but we ran behind them for 200 yards and they didn’t give up a sack,” USC head coach Lane Kiffin tells reporters after the game.

The Trojans got off to a fine start after gaining a 14-0 edge in the first quarter, which saw a rushing touchdown from sophomore quarterback Matt Barkley and a seven-yard TD reception by Rhett Ellison. However, the Wildcats managed to cut the visitor’s lead by seven points at halftime, as USC led 21-14.

With 3:35 left in the third quarter, Trojan kicker Joe Houston nailed the game-winning field goal from 30 yards out, while Arizona scored a TD with just over a minute left in the affair.

Barkley amassed 170 passing yards on 21-of-35 attempts, while running back Marc Tyler collected 160 rushing yards and one score on 31 carries. More than seven receivers caught passes from Barkley, including freshman Robert Woods’ eight catches for 41 yards.

“I don’t think I’ve ever carried the ball over 30 times in high school, Pop Warner, nothing,” Tyler argues.

“Our inability to stop the run consistently hurt us,” Wildcat head coach Mike Stoops admits. “Marc Tyler is great on the vertical push. He ran well all night, and some of that can be attributed to our lack of discipline. They pounded us pretty hard tonight, and we just have to get better.”

USC faces a test in Corvallis, as they travel to Oregon for a visit against the Beavers on Saturday, Nov. 20, at 5 p.m.

Football
NFC preview: How the Eagles stack up against the rest of the conference
1,038 views

Football
Austin Proehl, hopes to join his father with a Super Bowl ring, helps out by playing role of Edelman
1,815 views